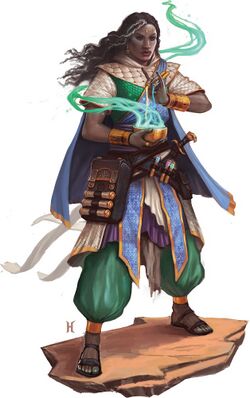 The Garundi (pronounced gah-ROON-dee)[1] are a human ethnicity most commonly found on the eponymous continent of Garund, but who have spread throughout the Inner Sea region.[2]

Among Golarion's tallest humans, the Garundi boast dark skin, sharp cheekbones, broad shoulders, and premature bright white hair.[3] They normally favour colorful clothes that are practical and beautiful regardless of how far from Garund they live. Men often wear long robes, kilts, pointed hats, or sashes, while women can be seen dressed in billowing blouses, decorative scarves and wraps. Many Garundi in far-off lands try to incorporate traditional clothing into their outfits. This does not mean that Garundi fashions are culturally orthodox. Those living in northern Garund, for instance, tend to incorporate Keleshite modes of dress into their appearance, while those living in Vudra adhere to many of the local fashions. No matter where they live, however, and since temperatures can vary so much, they tend to dress in layers to make it easier to adapt their clothing as appropriate.[4][2]

The Garundi people are thought to have originated in the south of the continent and migrated north, although no one knows exactly when this occurred. It was certainly in ancient times (probably in the Age of Darkness or the Age of Anguish), as the Garundi are responsible for several of the most ancient civilizations in the Inner Sea region including ancient Osirion, the Jistka Imperium, the Shory, and the Tekritanin League.[2][4] Ruins of pre-Earthfall Garundi civilizations dot the continent, although little is known about them.[2][3] Their subsequent history has been no less illustrious. They are the founders and main inhabitants of the modern nations of Osirion, Thuvia, Rahadoum, and the Grand Duchy of Alkenstar, also forming an ethnic majority (or at least sizeable minority) in Absalom, Geb, Katapesh, and Nex.[2] The Garundi have also migrated throughout southern Avistan, where they can be found in small numbers.[4]

The Garundi are renowned as a friendly and helpful people whose culture is based around small, familial clans that generally consist of 15-20 families. These clans form the basic unit of Garundi society, unlike other cultures which tend to be built around the family.[2]

Hierarchies within a clan are quite complex and rarely understood completely by outsiders. There is also a complex hierarchy amongst different clans that inhabit the same area. Due to the migratory nature of the Garundi people, a clan on the move frequently enters other clans' territories. Old customs govern how clans treat each other when they meet. Any clan entering another clan's area is treated as an honored guest for the first month of their stay. After that the new clan must either move on or pay heavy tribute to the dominant clan of the area. If the new clan can continue paying this tribute for an entire year, they are accepted into the community at the lowest social level.[4]

Because clans new to a geographic area must always subjugate themselves to any Garundi clans already present, landless clans tend to wander the world, searching for a place of their own. This journey can often take years or even generations, and the clans always carry mementos from anywhere they have temporarily sojourned. These physical reminders often are incorporated into a clan's tales and artworks.[2] 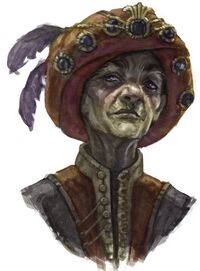 Because all Garundi clans are associated with a specific geographical area, an individual's name almost always incorporates a local landmark. The higher in rank a person is, the larger and more well-known their geographical name tends to be. High-ranking Garundi carry the names of large territories or geographical features such as rivers, mountains, or regions. Mid-range names refer to well-known local landmarks such as waterfalls, neighborhoods, or important local buildings. Low-ranking Garundi carry the name of a local street, statue, or even tree, generally near to where they were born.[2]

Garundi seem to be particularly fond of Golarion's elder deities, or those who have special ties to their homelands. These include Gozreh, Nethys, Pharasma, Sarenrae, and even Urgathoa.[2] The most widely worshiped of these among the Garundi is Nethys, who was Garundi himself prior to achieving divinity.[5]