Depending on the version, it includes the Perils of the Lost Coast adventure, with other adventure decks available for purchase.[1] Multiplayer features were announced, but the feature is no longer marked as "coming soon" due to a lack of progress.[4] 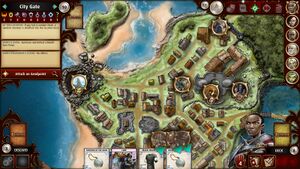 A screenshot from Pathfinder Adventures

Pathfinder Adventures includes these features exclusive to the digital version:

Differences from the table-top game

The following table-top content has been adapted or released:

Quest Mode
Unlocked shortly after playing story mode. Play a random scenario with a random villain using any character that you have created. Every ten levels, you go up a tier. The tier you are in is based off the highest-level party member.