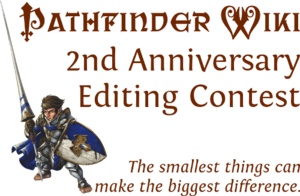 This week has been awesome here on PathfinderWiki!

Monday was the project's 2nd anniversary, and we've got lots of great news to celebrate. First, our month-long Anniversary edit giveaway began at the start of the week and will run through the 8th of April. For every ten edits registered users make to the wiki, they receive one chance to win one of several great prizes including a set of custom-painted Pathfinder minis from Reaper and up to $50 in paizo.com credit! Edits can be as simple as adding a category or fixing typos and grammatical errors, or as complex as organizing long articles on detailed subjects throughout the Pathfinder Chronicles campaign setting; it's up to you how much you can or want to do and all of it is appreciated.

To spread the word about the anniversary giveaway, we have a spotlight ad that should start popping up on other gaming Wikias to get people to the site. As if this weren't enough, our place in the spotlight queue finally came up, so the ad we've been anticipating since December has finally started circulating. Check them both out below.

Finally, and perhaps most importantly, we've hit a major milestone this evening in terms of our article count. Nizos, a relatively new Chronicler has jumped in head-first recently, taking on large articles like Westcrown and Stolen Lands and tonight his hard work pushed us over the edge. Check out Narlmarches—our 3000th content article! Congrats Nizos, and keep up the great work!

To the rest of the project's Chroniclers, both new and old, be proud of these milestones. We've all worked hard to get the wiki to where it is today and everyone has played a part, from the most active editor to those of you who only use the site as a visitor. PathfinderWiki and the Pathfinder community as a whole are stronger because of you. Great work! But our task is far from over, and there are ever more improvements to be made. So take heart in our past achievements and stretch out those typing fingers; we're just getting started!