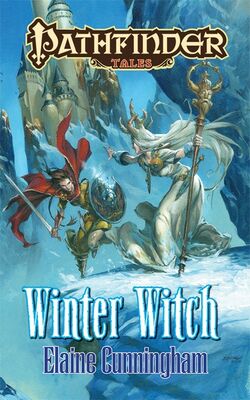 As promised, Paizo today announced its upcoming products from September 2010 through the end of the year. The most notable among these new books are a revised and expanded version of 2008's Campaign Setting and a line of novels set in Golarion helmed by two of the biggest names in game fiction.

The Pathfinder Fiction line will launch in September with Elaine Cunningham's Winter Witch, set in the frigid and treacherous nation of Irrisen. The following month, Dave Gross will follow up his Hell's Pawns novella with the second novel in the the line, Prince of Wolves. In his announcement post on the Paizo messageboards, Technical Director Vic Wertz also announced plans for a later novel by fan-favorite Paul S. Kemp.

In the flagship Pathfinder Adventure Path line, four new adventures were announced to carry the Serpent's Skull Adventure Path through its penultimate adventure. Tim Hitchcock will take adventurers to a lost city with the competition on their heels in Racing to Ruin in September. The following month, Pathfinder newcomer Kevin Kulp explores the lost Azlanti city in The City of Seven Spears. Returning for his seventh Adventure Path installment in as many paths, Greg A. Vaughan leads the story beneath the ruins into the Vaults of Madness. In December another Pathfinder rookie (but industry veteran), Graeme Davis, throws countless threats at the heroes in a subterranean serpentfolk city in The Thousand Fangs Below.

With copies of the 3.5-native Campaign Setting hardcover selling out quickly, Paizo was faced with the need to reprint the book, and will take the opportunity to update it to Pathfinder Roleplaying Game rules and expand on the world with an extra hundred or so pages of content in September's Pathfinder Chronicles Campaign Setting World Guide: The Inner Sea. Further continuing the Pathfinder Chronicles line's established traditions, Misfit Monsters Redeemed will re-imagine some of the games most pathetic, hated, and ridiculed monsters, such as the lowly flumph and the dire corby. November promises a treat for any Golarion gamer's wall—a 32-panel poster map of the entire Inner Sea region—designed by Rob Lazzaretti and available in the Inner Sea Poster Map Folio. Closing out the year, Lost Cities of Golarion is sure to supply players with endless wealth and GMs with perilous dangers as we approach the new year.

Pathfinder Companions will continue to alternate with the Pathfinder Modules line on a bi-monthly schedule. The player-friendly Inner Sea Primer will give an overview to setting-newbies in September, while Halflings of Golarion wraps up the game's gore races with the littlest and most often overlooked of Golarion's inhabitants in November. Two exciting adventures will come out in October and December in the Modules line. The 17th-level wilderness and dungeon adventure, The Witchwar Legacy, will be set in Irrisen and compliment the first Pathfinder novel, while the 1st-level The Godsmouth Heresy will introduce new players to a Pharasmin ossuary beneath the strange Varisian city of Kaer Maga.

Finally, Paizo plans to make good on their promise to release a monster book a year as part of the core Pathfinder Roleplaying Game line of hardcover rulebooks with Bestiary II. Many iconic creatures missing from the first Pathfinder Bestiary will make an appearance here, as well as many new beasts including Pathfinder's neutral outsider race, the aeons.