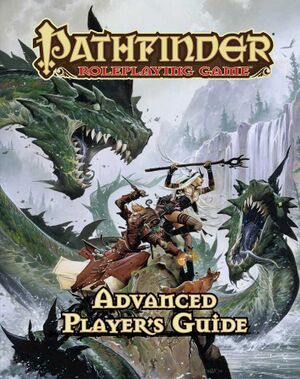 Blood for Blood by Neil Spicer, War of the River Kings by Jason Nelson, and Sound of a Thousand Screams by Richard Pett will finish off the second half of the Kingmaker Adventure Path. In August, Souls for the Smuggler's Shiv will launch the Serpent's Skull Adventure Path.

Paizo will release two new adventures in the Pathfinder Modules line next summer, including the Open Design patron produces From Shore to Sea by Brandon Hodge, and the first Pathfinder Roleplaying Game adventure from gaming legend Monte Cook, a giant-based adventure entitled Curse of the Riven Sky.

Several books will tie in closely with the Serpent's Skull AP, the first of which is Sargava, The Lost Colony, a Pathfinder Companion set in the AP's starting location. Following two months later in the same line is the next in the races of Golarion series, Orcs of Golarion.

The second supporting book for the upcoming Adventure Path is the Pathfinder Chronicles sourcebook Heart of the Jungle, a regional sourcebook on the mysterious jungles of the Mwangi Expanse! In June, readers will get a more detailed glimpse into the ruined city of Kaer Maga, a location only briefly glimpsed in Seven Swords of Sin and Eando Kline's Pathfinder's Journal. City of Strangers will be penned by author of both previous accounts, Paizo Editor James L. Sutter. The following month, the Map Folio line will see a change in direction with the release of the Kingmaker Poster Map Folio which will include six poster maps in place of the reprinted battle maps from the AP itself. In August, the much anticipated followup to Princes of Darkness will hit the shelves, an examination of the demons of the Pathfinder Chronicles campaign setting by Editor-in-Chief James Jacobs entitled Lords of Chaos.

Last week, Paizo formally announced the Advanced Player's Guide, which they mentioned informally at GenCon and on Blog posts since. They also posted the dates for PaizoCon 2010, the followup to last year's smash convention. It will be held June 18-20 at the Coast Hotel in Bellevue, WA. Don't miss it! Tickets are already on sale at paizo.com.

So now that product pages have been added to the wiki, I'm headed to bed. These are always the most exciting and exhausting days for me. I will certainly dream of Sargavan orc demon-worshipers fighting giants in Kaer Maga tonight!