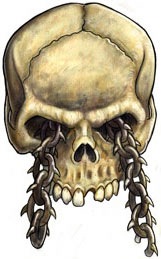 Culminating on the first new moon of the new year, the Eternal Kiss is an 11-day ceremony honoring Zon-Kuthon. On the final day, a living sacrifice is made to the Dark Prince, after the victim is pampered and pleasured for the ten days prior. The sacrifice can either be an enemy or a great devotee of the church, and is kept alive for as long as possible during the torture using magic. This holiday often involves fortune-telling as a part of the torture, using the victim's entrails or their cries of pain to determine the Midnight Lord's will. Occasionally, it is believed that the sacrifice will prophesy with the voice of Zon-Kuthon himself.[1][2][3]