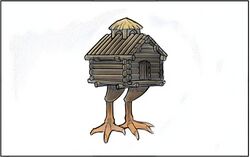 Pjallarene is an Irrisen holiday

Pjallarane Day is an ancient holiday in Irrisen celebrated on 1 Abadius (New Year's Day). Every 100 years, Baba Yaga returns to Golarion to remove her daughter from the throne of Irrisen, and put another daughter on the throne instead. In 3713 AR the third Queen of Irrisen, Pjallarane, and her children chose to resist. Baba Yaga ruthlessly crushed the rebellion in a single day, which is now celebrated as a holiday. The festival includes feasting and the burning of effigies of tar and straw. This is a reminder of the fate of Pjallarane's followers, who were burned alive as a warning to all those who would oppose Baba Yaga.[1]