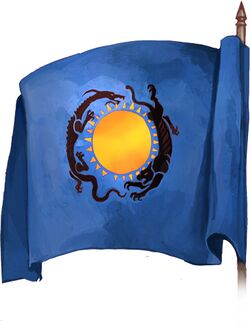 The revolutionary flag of Bachuan

The Bachuan Revolution laid the foundation of the Republic of Bachuan. Formerly known as Pen Wa, an outlying province of great Imperial Lung Wa, the province's greedy officials and their corrupt priestly allies struggled to control the impoverished peasant class following the empire's fall in 4606 AR. In this era of political chaos, the peasant-philosopher Grandfather Pei arose preaching the secular gospel of communism and rallied the abused and downtrodden farmers, miners, and fishermen under a new banner: a tiger (representing the peasants) chasing an imperial dragon (the aristocracy) around a sun.[1]

Although the Revolution failed to take the imperial Ten Thousand Summer Palace, the rest of Pen Wa was overtaken, religion was outlawed, and a new order of wealth distribution and state-enforced equality was instituted. Re-education camps were created to instil proper communist values in the populace. Grandfather Pei founded the Sun Chamber to govern the new nation, to which he restored its original, pre-imperial name: Bachuan.[1]