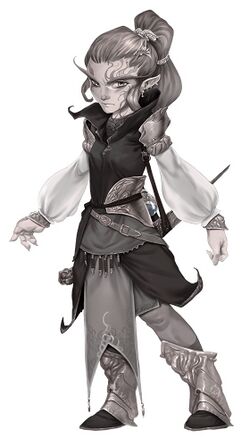 The Bleaching is the name given to the physical decolorization and unnatural aging of a gnome, and is caused by a lack of exposure to new and exciting experiences. This leaching of color is accompanied by a psychological decline and loss of charisma: first into depression and apathy, and eventually into madness and death. Gnomish efforts to fend off the Bleaching only serve to fuel their racial curiosity and whimsy, giving it somewhat of a manic edge. Some claim that the Bleaching is a result of the gnomes' leaving the First World thousands of years ago.[1][2][3]

Despite generations of visionary gnomish research, the exact nature of the dire affliction known as the Bleaching remains a mystery. The race's scholars believe it is tied to the events of the exodus and insist that the mortal world lacks the animus to nourish a gnome's sophisticated spirit.[1]

The Bleaching begins to manifest in early adulthood, and is characterized by a blanching of skin, hair, and eye color. The complexion of the gnomish body is tied to the experiences she alights upon. The more shocking and vivid a gnome's life, the more vivid in color she herself becomes. In contrast, a lack of excitement causes a fading of color and is accompanied by depression and the dulling of curiosity, heralding the beginning of a vicious spiral that leads to insanity and death.[1] This rapid ageing causes some to believe that gnomes are immune to normal aging, which is untrue. Gnomes age like other humanoid races, but are quite long-lived, almost as long-lived as elves. They simply must contend with the effects of the Bleaching in addition to their normal aging. As gnomes age naturally, they require increasing amounts of excitement and new experiences to stave off the Bleaching, a condition that runs counter to the greater familial and social responsibility expected of older gnomes. This pressure can cause aging gnomes to commit very foolish acts that lead to their death.[2][4]

Even though the increasing boredom and apathy makes it more difficult for a gnome to counter the effects of the Bleaching once it has begun, its effects can be fought. By immersing herself in new situations, a gnome can halt or even reverse the physiological and psychological drain, restoring color and joie de vivre to her life.[2] A gnomish organization known as the Wonderseekers works around the world to reverse the effects of the Bleaching, appearing on the doorsteps of gnomes who have begun the process. They collect stories, items, and experiences and give or communicate them to others in order to help fend off any further Bleaching effects.[5]

Most gnomes see the Bleaching as a preventable condition, and because of this, gnomes who have succumbed to it are blamed for their state, although many are also sympathetic. Because it is ultimately fatal, gnomes afflicted by the Bleaching are regarded with fear by other gnomes. This isolation, of course, can lead to further Bleaching, creating a vicious downward spiral.[4]

While most gnomes die of the horrific effects of the Bleaching in a long and drawn-out process, some are able to reach a stable plateau and exist in its emotional void. Often fueled by a dramatic trauma, these individuals, called bleachlings, remain in a distorted state of consciousness, immune to the further deleterious effects of the affliction. Their skin, hair, and eyes seem either colorless or have muted tones, and their demeanors are calm and dreamy; a bleachling is rare to anger. A bleachling's connection to the First World is incredibly strong, granting her wisdom and the ability to communicate with animals, as well as an ageless existence. Bleachlings are generally at least middle age before the aging effects of the process cease to affect them. At this point a bleachling effectively ceases to age.[1][2]

Bleachlings are generally seen as either great heroes or monsters by gnomish society, and tend to live solitary lives. They are seen by other gnomes to have "returned from the grave", having survived an affliction that kills most others. They tend to see other gnomes as either immature children or butterflies who have not emerged from their cocoon, or else fear the prejudice of their own kind. Most withdraw to distant parts of the world, such as deep forests or mountaintops. They seem to also have a strong connection to the natural world and its inherent balance, leading many of them to become druids.[2][4]