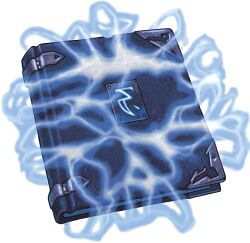 A source of rare cantrips.

A cantrip is the name given to any spell of the lowest level that an arcane caster, such as wizard or sorcerer, might cast. The magic associated with a cantrip is so inconsequential that a spellcaster might cast it without limit. Nevertheless, wizards must still write cantrips in spellbooks in order to memorize it for casting.[1]