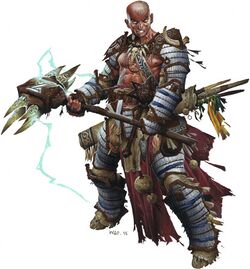 The earth breaker is a 14-pound hammer brought into battle by the Shoanti tribes of Varisia. It is swung with two hands, and the power generated is channeled into the blunted spikes on the weapon's head.[1] It is part of a Shoanti fighting style called Thunder and Fang, in which a warrior wields both an earth breaker and a klar quite effectively.[2]