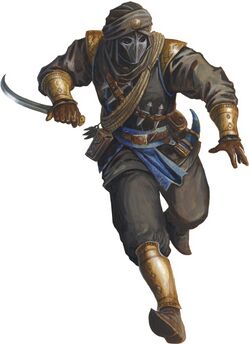 For another meaning of "Nightwalker", please see Nightwalker (nightshade).

The Nightwalker is an assassin in the city of Katapesh and alter ego of Katapeshi nobleman Isra Darzi.[1] In fact, he is the most coveted assassin in the city, as he always finished his kills.[1][2] He is a man of mathematics, careful in his art to strike only when the odds are in his favor. He is nimble and dexterous, using stealth and shadows to get close to a target, his speed and cunning to finish the job, and if need be, his quick thinking and acrobatics to escape.[1]

He collects his assignments from a box in a deserted part of the city. They are placed there by Mirza, his 'agent'. This box protects both of them, as it ensures that Mirza does not know the Nightwalker's true name. They also have a way of passing coded messages through this box, the one known message is that a black pearl means that the Nightwalker is done. [1]

His assassination targets have included Hasim Rakhman, ordered by his own captain of the guard. The Nightwalker failed to see that this mission was a trap, and he was the real target. His narrow escape made him decide to get out of the assassination business, at least for a little while.[1]