This is an article about the city of Katapesh. For information on the nation of the same name, see Katapesh (nation).

South of most civilized lands, sprawling across a valley of blazing-hot sand, is one of the most incredible and wondrous cities in all of Golarion: the great desert metropolis of Katapesh (pronounced KAT-a-pesh), the City of Trade.[3][4] Katapesh is a city of organized chaos where cash is king and commerce is the highest god.[5]

From its early beginnings as the Golden City, Katapesh was rich in natural resources and is located on the shores of the Obari Ocean. It retained its mercantile importance no matter who occupied the city.[6]

The metropolis of Katapesh is the home to many bazaars and fairs that sell anything one might desire. Two notable permanent markets within the city are the Peculiar Emporium and the Nightstalls.[7]

A group of Sarenrae's faithful left Sarenrae's Bastion to search for a "golden land", and found a lush valley with a massive stone sphinx standing at the center. They settled in the valley in 2218 AR and named it the Golden City. In 2375 AR, a band of raiders of all races attacked and overthrew and took over the Golden City. In the Year of Scouring Winds (2589 AR), a sandstorm lasting 33 days destroyed almost all plant life in the valley, killed hundreds, and nearly buried the Golden City. Survivors fled, some to Sarenrae's Bastion, where priests proclaimed the sandstorm a "judgment" against the city's evil populace. One hundred years later, a mysterious woman named Nimhar walked out of the desert and began to clear the ruins of the town. In 2692 AR Nimhar took control of the new Golden City and renamed it to Sandstar. People flocked to the new city during the so called Oasis Age, and people lived in peace for hundreds of years. The settlements flourished, but in 3249 AR an alchemist named Atopu discovered the production of a narcotic substance he called pesh. News of pesh spreads rapidly, drawing criminals and merchants of all kinds to the city of Sandstar. A bandit named Jade-Eye slaughtered Nimhar in 3250 AR and took control of the city; Nimhar's body was never found. Jade-Eye renamed the city Katapesh, and the region soon adopted that name. In 3725 AR the Pactmasters took over the city, and construction began on the city's new palace and outer walls. In 3730 AR the infamous Nightstalls opened in Katapesh, and by 3750 AR the city's outer walls were completed. In 4706 AR the population of the city of Katapesh reached 210,000 people, which included slaves and long-term visitors.[8] 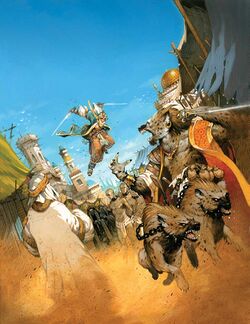 Disagreements in the city's markets are not unheard of.

Katapesh overlooks the Obari Ocean from a sandy promontory above a series of black, glass-like cliffs called the Obsidian Wall. Beneath the cliffs a flat stretch of ground extends to the sea. Katapesh is surrounded by 40-foot-high sandstone walls, topped by ramparts and interspersed with crenelated towers.[6]

The city is divided into five separate areas: Dawn Gate, Docks, Inner City, Lower City, and Twilight Gate. Three more smaller communities shelter in the shade of the city's tall walls, including Dog Town, which huddles around the Dawn Gate, the Daystalls, located outside of the Serpent Gate, and the Sprawl near the Twilight Gate. A fourth community outside of Katapesh's walls, Castle Clarion, is located just south and east of the Sprawl and has attracted neighbors and a few shops. The River Scorpion wends its way through part of the city, passing through the Serpent Gate, exiting into the Sprawl, and flowing out into the Obari Ocean.[9]

As they control much of the trade within the anarchic city, the mysterious Pactmasters are the de facto rulers of Katapesh. They reside within several shining buildings near the city center, the entrance to which is blocked by the Aluum, their personal construct guards.[7] While the Pactmasters maintain control over the city of Katapesh, day-to-day business and governance is left to Pactbroker Hashim ibn Sayyid.[10] Master of the Vault Jalal Abdul-Abadar leads the clergy of the Immaculate Repository, a powerful temple of Abadar that offers banking, storage, and surety services to the city's many merchants.[7]

Trade is the highest priority of the law in Katapesh and the trade guilds are the political powers in the city.[11] The people of Katapesh are proud of their professions. Every line of work is part of a guild which guarantees each member's economic well-being, even if that means having just enough to feed oneself each day. The guilds also protect their members from the harsh penalties for unsanctioned business practices and the often deadly vigilante "guild justice".[12]

A large number of local guilds and organizations have been established in the city:

A number of international organization also have activities in the city: