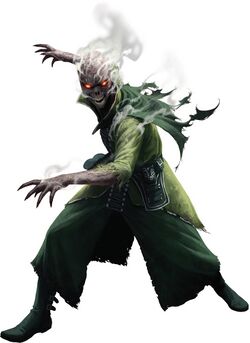 Blast shadows are undead creatures born of intense, fiery conflagrations. They rise from the ashes filled with a burning hatred for all living things, looking to spread the pain they experienced during their demise.[1]

Blast shadows look like hellishly burnt versions of whatever creature they once were, normally blackened skeletal humanoid creatures with many chunks of scorched flesh still clinging to them. They are covered with tiny cracks that exude a fiery glow and smoke as if a furnace burned within, while what remains of their clothing or armour is fused to their bodies. Their eyes glow with unholy fire and seep smoke into the air. Due to their emaciated frames, blast shadows normally weigh around sixty pounds.[1]

Blast shadows are normally found lingering near where they were created. They are most commonly found around the burnt wastelands caused by some fiery apocalypse. When they remain in such an area, they will sometimes try to recreate it as it was before the fiery disaster that birthed them. As they use only the materials available, these recreations are invariably creepy, with buildings rebuilt in blackened timbers and scorched stone and corpses arranged in the way they looked at the moment of their death. Blast shadows are sometimes found in the service of evil magic-users, from pyromaniac arcanists to priests devoted to dark fire deities.[2]

Blast shadows are created when a creature is killed in a magical, fiery conflagration, the most common cause is the spells of wizards and sorcerers. The magical fire must be one of great power to create a monster like the blast shadow, no mere burning hands or fireball spell will suffice: it must be a truly potent invocation. Sometimes a natural event can create blast shadows, as long as it is preceded by a great act of magic, such as a spell that pulls a flaming meteor from the sky. Interestingly, blast shadows are not a unique type of undead; there are other varieties that are created by other potent elemental magic namely acid shadows, lightning shadows, and freezing shadows.[2]