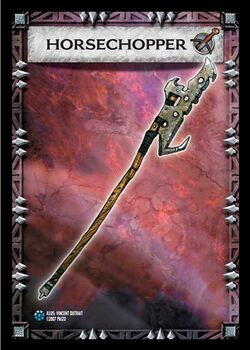 A distinctive weapon of the goblins of western Varisia, a horsechopper is their name for a halberd. Like most goblin-made weapons, such as the dogslicer, a horsechopper is poorly constructed and has the tendency to break at the most inopportune times. It is sized for smaller creatures and is thus awkward to use for larger ones.[1] It has a hook on the opposite side of the blade, allowing it to be used to trip four-legged animals.[2]