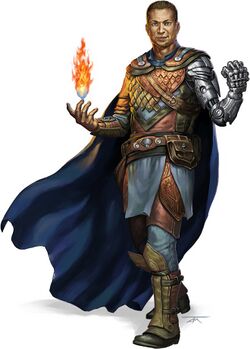 A magus emulates a Jistkan artificer.

During the middle-period of the Jistka Imperium, the artificers were one of the two factions struggling for power. They concentrated on the manufacture of golems and other powerful war machines. As the Jistka Imperium expanded, the artificers built the majority of their golemwork factories in the Jistkan territories of southern Avistan while their rival faction, the magistrates, established their most prominent holdings in northern Garund.[1]

Artificers' automatons and inventions were incorporated in Jistka's society. Their uses varied from miniature mechanical actors for audiences' amusement, to imperial automaton troops and black-masked executioners. The most impressive of Jistka's golems were the colossal behemoth golems. The priest-artificers infused these elephantine goliaths with fiend-tainted compounds and fueled them with the spirits of daemons, devils, and demons. Their unholy, incredible power provided the generals of the Jistka Imperium with the additional power they needed to confront the divs and necromantic elemental outsiders of Ancient Osirion.[2]