Kurobozus, also known as black monks, are undead monks who violated the precepts of their monastic training in life.[1] 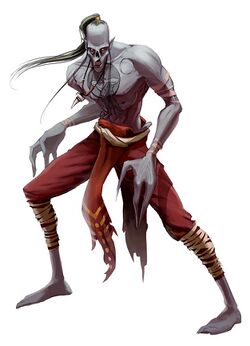 Despite its significant physical power, a kurobozu resembles a grey-skinned emaciated monk whose mouth is a distended, hollow pit of darkness.[1]

Kurobozus have to feed on the breath of mortals, usually by sneaking up on a sleeping victim or more rarely by stunning enemies in combat. This is not immediately fatal, but spreads the contagious black apoxia disease, which leaves behind an horrific rotting scent and leads to faintness, exhaustion, and death.[1]

Kurobozus hunt monks, especially former colleagues, out of jealousy. They partially retain their discipline, which they use to formulate long-term plans of revenge. They go out of their way to secretly assist malcontent ex-monks, revealing their identity to, and forging alliances with, those seeking to destroy their former masters and disciples.[1]