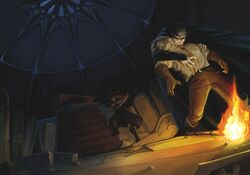 A young Ailson Kindler faces Viscount Oilic Galdyce as the nosferatu tears into her fiancé.

Viscount Oilic Galdyce was the immortal ruler of the Ustalavic county of Amaans during the 47th century AR. A nosferatu vampire of some power, he was driven to take countless vampire brides throughout the many years of his rule, desperate to create a male heir. His home, Castle Galdyce, was located in the Vale of Red Breath near the small village of Sen's Pass.[1]

The Viscount is believed to have been slain in 4685 AR by two adventurers, Ailson Kindler, and her fiancé Duristan Barlhein.[2] Castle Galdyce was largely destroyed, and the villagers of Sen's Pass were finally able to find some peace.[1] Kindler, as the famous authoress, immortalized the story in her book: Galdyce's Guest: Feast of the Nosferatu.[3]

Unfortunately, Barlhein and Kindler's work may not have been entirely successful as, lately, lights have once again been seen in the the ruined castle, and the locals fearfully whisper that Galdyce (or one of his brides) has returned.[1][4]