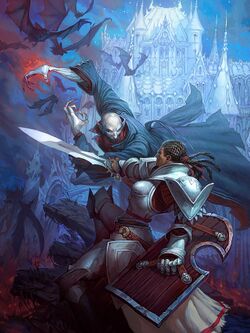 Nosferatu[1] are believed to be a primitive form of vampire, granted continual existence and power by their curse, yet still suffering the ravages of time.[2]

Unlike the eternally-young vampire, a nosferatu continually ages as the years pass. As a result, these undead are usually bitter individuals, their withered flesh, yellowed teeth, and gaunt features serving to broadcast them as outcasts among the living.[2]

Nosferatu retain many of the abilities they held before becoming undead. Their withered forms defy their strength and speed, and their hands develop claws that can be used to inflict significant damage. These creatures possess many powers similar to those of vampires, such as the ability to drain a victim's blood, control the will of others, resist certain forms of harm, and regeneration. In addition, they boast certain abilities that are uniquely their own, such as:[2][3]

Telekinesis
A nosferatu is capable of moving even sizeable objects by simply concentrating on the task at hand.[2]
Swarm Form
Similar to the shape-changing abilities of vampires, nosferatu are able to transform themselves into a swarm of smaller creatures.[3]

As immortal creatures that continue to feel the passage of time, nosferatu possess an outlook that is unique among intelligent undead. Their actions are often intended to forward objectives that require ages to achieve, yet are motivated by a sense of urgency that has its roots in the primitive nature of their curse. The continuous decay of their bodies dominates their understanding of their condition, often driving them to oscillate between depressive despair and desperate bouts of feeding in an attempt to stave off the failing of their bodies for just a while longer.[2][4]

Unlike other vampires, nosferatu willingly prey upon animals. This has the effect of allowing them a measure of inconspicuousness, although the extreme manner in which they savage and mutilate their prey can still alert hunters to the nosferatu's presence.[4]

The nosferatu were the first of the modern strains of vampire to emerge from their mysterious strigoi ancestors when these emerged from the Shadow Plane. The early nosferatu were driven to fury by their own innate hunger and their bodies' decay, and preyed on the living like beasts. This eventually caused a rift among their ranks when some of their kind chose to leave their animalistic natures behind, adopting the trappings of class and society of their prey instead. These reformist nosferatu became the first of the moroi, who in turn would give rise to the jiang-shi and the vetalas. The newer, more fertile strains of vampire, particularly the moroi, quickly came to outnumber their sterile ancestors, and replaced them as the most prevalent and iconic face of vampirism.[5]

Ramoska Arkminos
An authority on disease, this centuries-old nosferatu spends much of his time researching a cure for the curse of vampirism.[6]
Viscount Oilic Galdyce
Immortal ruler of the Ustalavic county of Amaans during the 47th century AR.[7]