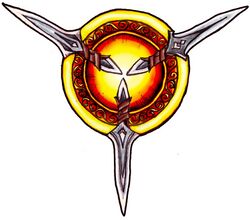 Elves and half-elves are common among the temple prostitutes of the Pleasure Salon of Calistria in the Ascendant Court district of Absalom.[1] Elves are otherwise relatively uncommon in Absalom, mostly consisting of adventurers or outcasts; more common are their half-elven descendants.[1] Although Calistria's priests play a significant role in the operations of the temple, the Pleasure Salon is managed by the ranking sacred prostitute, Dyrianna of House Avenstar.[1]

The edifice is constructed in the colonnaded style of a classical Azlanti temple to match the architecture of Absalom rather than elven cities. Its exterior is covered with bas-relief sculptures of hedonistic humanoids, and it is rumored that the interior contains blasphemous sculptures of Calistria herself engaging in salacious activities with other deities.[1]

The temple prostitutes are clean and well-educated, and offer their services on a sliding scale; they can develop a high social status in the city.[1]

The temple supplies honey—unusually made by wasps—that is used by the city's mead brewers.[1] The same breed of honey-producing wasps are also kept by the Scions of Revenge at the Calistrian temple of Imvrildara in Kyonin.[2]

The Pleasure Salon provides public baths that have become a meeting-place for distrustful factions due to the temple's requirement for nudity within the baths.[1]