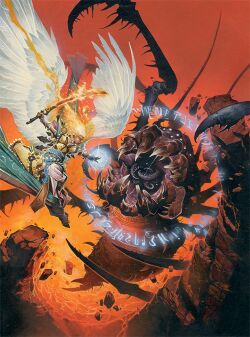 A deity, also known as a god or goddess, is a being or force of incredible power capable of granting its power to mortal beings through divine magic. A deity is strongly associated with a specific alignment, several domains, and a plane (typically an Outer Sphere plane).[1][2]

Golarion draws the interest and intervention of many deities, including some ascended from its ranks of mortal races through supernatural forces such as the Test of the Starstone. These deities are often grouped by their followers' region or race, though their power is rarely limited to such demographics.[2] Others still have faded from relevance but still exist, and a handful have died—most prominently, the theorized death of Aroden corresponded with the calamities of the Age of Lost Omens.[1]

In one form or another, many of Golarion's faithful worship one or more of these gods:

Deities of the Inner Sea region

Other gods primarily worshiped within the Inner Sea region include:

Deities of other regions

Many races worship gods exclusive to their own kind.

Iomedae passes the Test of the Starstone.

Most deities have vague or unknown origins, but a few were once mortals whose histories and ascension were witnessed and recorded to some degree. These include:

A demigod has the touch of divinity and can grant powers to its followers, but do not reach the scope or power of a true god. Some, like archdevils and psychopomp ushers, serve their more powerful kin; others, such as velstrac demagogues, protean lords, and Iron Gods, are independent rulers.

Razmir's followers are little more than a cult of personality.

Despite the frequent and public intercession of deities on Golarion, some mortals refuse to believe in or rebuke the authority of divine forces. Rahadoum in particular is well known for being a militantly atheistic state.

Not all who claim divinity actually wield it. For instance, followers of Razmir claim to draw divine power from their patron but instead wield deceptive arcane magic.[11]

Deities of other planes

For all their power, deities are forbidden by informal arrangements, as well as ancient laws and edicts, from taking direct action in mortal affairs or each others' planar realms.[12][13] Direct intervention at a large scale would draw the wrath of a deity's opposing powers and risk their own destruction.[14] However, there are recorded instances of deities violating these mores, particularly Aroden's direct defense of humanity against Ibdurengian[15] and Tar-Baphon,[16] and Desna's invasion of the Abyss and destruction of the demon lord Aolar in retribution for the possession of a mortal priestess, which led to a direct conflict between multiple deities. Deities have also created offspring with mortals.[13]

Nearly all gods have certain divine attributes that distinguish them from one another. These relate to either the divine being itself, or how they are worshiped by mortals.

All gods have areas or concern or portfolios, subjects they and their followers focus on and hold in high regard.[17]

Each deity has a favored weapon that is associated with him or her. Priests of a given deity tend to prefer wielding this weapon over others.[18]

Most deities employ a herald and servitors who act on direct behalf of their deity, as gods rarely manifest directly among mortals. When they do, a deific manifestation can be "killed", but doing so has little or no effect on the deity.[19]

All deities have species of animals that are sacred to them and their followers.Cite error: Invalid <ref> tag; invalid names, e.g. too many Many gods also have favored animals, to which a deity feels a special kinship or which seem in some way symbolic of the god or her attributes or dogma.[20]

In especially rare cases, a god might procreate with a mortal. The resulting child is often fated for greatness and expresses supernatural powers.[19]

Followers of the hundreds of known deities express their devotion differently, but some commonalities emerge from cultural and religious differences.

Worship often focuses at holy sites or temples, but organized services aren't universally required. Shows of obedience and prayers can be simple or ritualized, and are a common means among a god's faithful of communicating with their deity. Deific power is equal among those who wield it, regardless of how many followers the god has or how powerful it is in relation to other gods, though the more practical capabilities of larger congregations can have a material effect on their followers' effectiveness.[2]

The most capable among a deity's faithful often gain divine magic powers from their deity and take up a class to further specialize such gifts. In most cases this results in a cleric or inquisitor; for good-aligned deities this includes paladins, while for evil-aligned deities it includes antipaladins.[21]