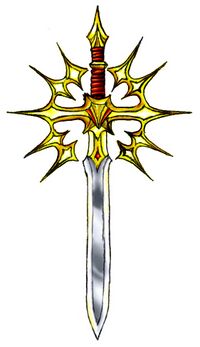 The Seventh Church of Iomedae is an important temple of goddess in the Ascendant Court district of Absalom, and the site of the seventh of Iomedae's 11 miraculous acts, the calling of the Undying Light.[1] This miracle is commemorated by the temple itself and the Iomedaenne, a 10-foot statue of the goddess carved from red limestone and banded with sapphires. Although the goddess is popular in the city, and the Seventh Church trains most of her clerics here for three or four years, most of the priests at the church are young or elderly, since her most vital followers take up service elsewhere. Absalom is seen as a place of recruitment by the goddess's church, rather than a bulwark of faith in peril. The high priest of the temple is Tavorae Falsebane, who replaced the aged Genedair the Faithful who passed on to his final reward. Across the main street from the church is the Tempering Hall, which trains paladins of Iomedae, as well those of the churches of Abadar, Irori, and Shelyn.[2][3]