The Acts of Iomedae were eleven miracles performed by mortal Iomedae throughout Avistan and Garund as a demonstration of Aroden's might.[1] Recounted in the holy text of her faith (called The Acts of Iomedae, or simply The Acts among her faithful) each of the then-mortal goddess's legendary episodes of heroism provides an example of Iomedaean virtues. The details of the stories vary between regions, though all have the same general themes. Iomedae herself acknowledges that the lessons themselves are important, not the particulars.[2][3] 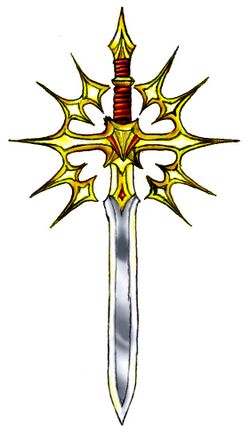 The Second Act
In her second miraculous act, she defeated a coven of witches in the city of Senghor,† freeing the city from their tyranny.[4]

The Third Act
From the back of a flying griffon, the soon-to-be-goddess hewed Segruchen the Iron Gargoyle's wings from his body, sending the so-called King of the Barrowood plummeting to the ground where she slew him in his falling-crater before he could escape.[2]

The Fourth Act
Calling upon Aroden's then-herald Arazni, Iomedae convinced a regiment of mortally wounded knights at the Second Battle of Encarthan to stay their ground against a horde of wraiths until reinforcements arrived at dawn to rescue them.[2]

The Fifth Act
In what is now considered her fifth miraculous act, Iomedae smote Erum-Hel at the Battle of Three Sorrows (the same battle in which Tar-Baphon returned Arazni's body to the Knights of Ozem), forcing the crippled Lord of Mohrgs into hiding in the depths of Orv.[2][5]

The Sixth Act
Iomedae instantly reforged her sword—magically shattered by the Whispering Tyrant—fusing it together with a prayer and an oath to end the wizard-king's evil[2] creating the artefact Heart's Edge in 3826 AR.[6]

The Seventh Act
The seventh Act was the calling of the Undenying Light in Absalom, which is commemorated at the Seventh Church. As a terrible storm shrouded the city in darkness, a pack of sea-ghouls attacked the city. The then-mortal Iomedae called for the Starstone to light the city; the Starstone Cathedral glowed with blue fire, and the stars shone rays of light that targeted the ghouls and allowed Iomedae and the city's defenders to destroy them.[7]

The Eighth Act
Convincing the graveknight known as the Black Prince to throw himself upon his sword as punishment for his evil is considered Iomedae's Eighth Act. This righteous suicide redeemed the undead knight's soul and allowed him to be judged in the Halls of Aroden.[2]

The Ninth Act
In order to free nine righteous knights from imprisonment by the vampire-mage Basilov, Iomedae gave nine drops of her own blood; when Basilov attempted to recapture them, she and the knights slew him.[2]

The Tenth Act
In the absence of its rightful lord—the heirless patriarch of House Narikopolus—Iomedae ruled the city of Kantaria in Cheliax for a year and a day, ending in 3831 AR, while its lord was missing. This reign brought prosperity to the city despite constant attacks by shapechanging horrors called faceless stalkers controlled by veiled masters, which she battled against personally.[2][6]

The Eleventh Act
In her eleventh and final miraculous act before ascending to godhood, Iomedae cast her cloak before her into the Pit of the Starstone in Absalom; the common wool cloth straightened and expanded into a firm walkway across the gap, allowing her to enter the Cathedral and take the Test of the Starstone.[2]