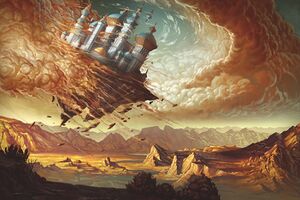 The last few moments of a Shory flying city

Flying cities were vast metropolises of glass, mithral, and adamantine that were the homes of the Shory people thousands of years ago. They are also known as sky cities, floating cities, flying citadels, or flying fortresses.

Although little is certain about the strange magic which powered these incredible cities (known as Aeromantic Infadibulum by scholars) there is little doubt that the flying cities represent the pinnacle of mechanical and arcane development. Researchers have attempted to replicate this magic with no real success.[1]

Though unlikely, some reports speak of individual structures, such as towers, stone ziggurats, glass spires, or golden domes floating through the air overhead. Many of these apparent sighting occur over the Mwangi Expanse, possibly hinting at the remnants of the almost-forgotten civilization.[2]