This page contains spoilers for the following products: A Lesson in Taxonomy.

Prince Kasiya was the sixth son of Pharaoh Khemet I and brother to Pharaoh Khemet II of Osirion. In looks, he was sometimes considered to be reminiscent of an eel, due to his small white teeth.

He joined the Pathfinder Society and aspired to become a venture-captain of that Society. Prince Kasiya became an acquaintance of Count Varian Jeggare during their time in the Mwangi Expanse, where the Prince lost his life attacking a herd of dinosaurs.[1] 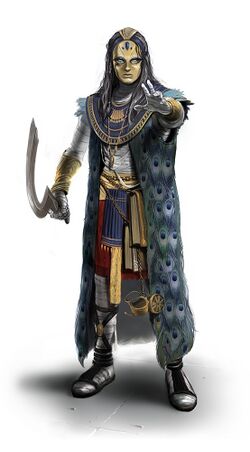