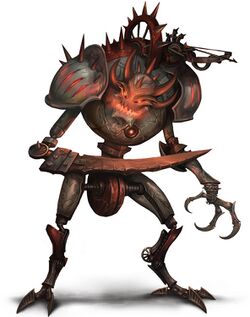 A machine soldier guardian of the Red Redoubt.

Karamoss the Machine Mage began assaulting Absalom in 3637 AR in order to gain control of the Starstone. To wage his siege, he constructed a huge metal, clockwork citadel in a single night that rose from the rocky ground like a red metallic growth. Within hours, hordes of hobgoblins emerged from the citadel and laid siege to the city. The city repulsed the attack for three weeks, but then the gates of the Red Redoubt of Karamoss opened to disgorge legions of metal warriors equipped with deadly weapons and guided by malign intelligence.[1]

The city was saved when Absalom's Druids of the Shaded repulsed the metal men with powerful magic. For two years the city was under siege until a final counterattack brought Absalom's army to the walls of Red Redoubt. In the slaughter that followed, the upper floors of the citadel were destroyed along with thousands of his automatons, but the mysterious wizard-artificer was never found.[1]

Exploration of the structure has been conducted by the Pathfinder Society[2][3] The Redoubt's tunnels reportedly contain a malicious warden robot forged of djezeteel known as the Red Terror.[4]

Paizo published a major article about the Red Redoubt of Karamoss in Chapter 5 of Dungeons of Golarion.