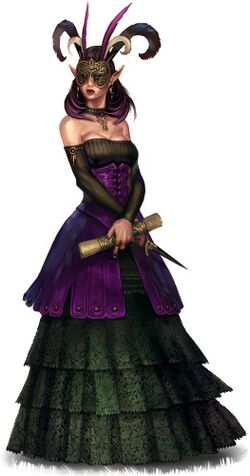 A participant at the Seven Veil masquerade ball.

The holiday known as Seven Veils, which takes place on the 23rd of Neth in most realms of the Inner Sea region, is a celebration of the region's diversity—a time when social boundaries break down even further in a day-long event filled with dancing, feasting, and courting. The evening traditionally closes out with the Seven Veil masquerade, a ball wherein the participants wear disguises that hide their race or gender (often using minor magical trinkets and spells) or disguise these features as entirely new characteristics. At the end of the ball, the participants remove their disguises to their partners, often with unpredictable and sometimes delightfully awkward results. Traditionalists and conservative minds often find the Seven Veils masquerades to be scandalous or off-putting, yet they remain particularly popular in most of the larger cities of the land.

Historians note that the original "Dance of the Seven Veils" has a much different genesis than one promoting diversity—the mysterious cult of Sivanah, goddess of illusions, mystery, and reflections, is generally cited as the source of this festival, and indeed, worshippers of the goddess (herself known as the Seventh Veil) count the 23rd of Neth as one of their most sacred of days. What rituals the church of Sivanah performs on this date, however, are unknown to outsiders, for the cult enjoys its secrets. This secrecy has, unsurprisingly, given rise to all manner of sinister rumour, yet when Seven Veils rolls around each year, its eager participants are quick to set aside rumour in preference for the night's fun and games.[1][2]