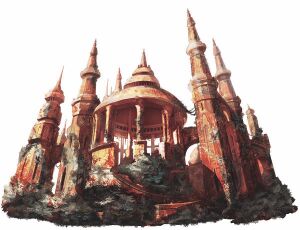 The headquarters of the feared Red Mantis Assassins, the Crimson Citadel is one of the few settlements on Mediogalti Island aside from the city of Ilizmagorti. Only the Red Mantis know its exact location and features, but there are numerous rumours about the place.[1]

The construction of the Crimson Citadel was begun in 2560 AR shortly after the Red Mantis arrived on Mediogalti Island and so before the founding of the city of Ilizmagorti.[2]

The lowest levels are known as the Ruvari or Ruby Halls, named after the large amount of blood purportedly sprayed on its walls over the years. They are stocked with poisonous animals, devious traps, and cunning creatures from the Great Beyond, and are used to train assassins.[3]

The middle levels, called the Sivlamlik or Honey Gardens, are a pleasure palace designed to cater to every desire of the flesh. Filled with sumptuous food, drugs, and servants who tend to every carnal desire, these floors are where assassins come to relax between missions.[3]

The Odalis, or Lavish Heart, are the upper levels of the Crimson Citadel, and are the home to the leaders of the assassins—the Vernai and Blood Mistress Jakalyn.[3]

The final area, the Faynas, or Iron Heart, is the hidden sanctum accessible only to the leader of the Red Mantis, Blood Mistress Jakalyn. The comprehensive Sarzari Library is believed to be housed somewhere within this area, and is said to be one of Golarion's largest and most comprehensive depositories of ancient knowledge.[3]