Gravedragger is the herald of Zyphus, god of accidental and pointless death.[1] 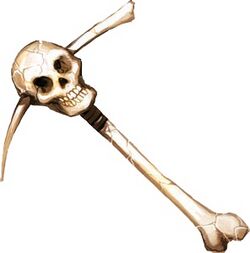 Gravedragger resembles a vaguely humanoid mass of grave dirt and bones, and wields a pick consisting of a rib and the skull of a giant. He also takes the form of an old, thin human with shifty eyes and a sickening, toothy smile, called Grinning Jack or Grinjack. Gravedragger speaks in a high, mad voice. While Gravedragger's physical body appears to be inorganic, he is a living creature; this appearance is his skin, and he still bleeds if wounded enough.[1]

In his mortal life, Gravedragger was once a farmer. When his family fell ill, he went to the nearby village to ask for a potion, but when he returned he found the house struck by lightning and burnt to the ground, killing his family who were too weak to escape.[1]

Believing he could have prevented their deaths if he were still at home, the farmer snapped, joined the cult of Zyphus, and started to learn magic. He started killing clerics of opposing gods and ambushing adventurers to bury the guilt he felt for his family's deaths. After many years, he died in his sleep and was chosen by Zyphus to become his herald.[1]

Gravedragger is sustained by divine power and does not need to eat or drink, but sometimes hovers over dead or dying victims and inhales what seems to be their souls. He claims he does this to sustain himself, but this cannot be verified. His internal organs are likely to be physical manifestations of the deaths he caused in Zyphus' name. Since he has no desire to die for a second time, he prefers to flee and heal in dangerous fights.[1]

In his Grinjack form, he often pretends to be a Pharasmin priest and administers false last rites to the dying just to enjoy the sound of their death rattles.[1]

Gravedragger spends most of his time in Abaddon, exchanging grisly stories with other servants of his god. He sometimes comes to Golarion to enact petty revenge, blasphemous murders, and 'accidents', and often works with daemons associated with these kinds of deaths, like hydrodaemons, meladaemons, crucidaemons, and leukodaemons. He is also fond of pugwampis and trickster fey, like bogeymen, and often helps save them from extermination. In his Grinjack form, he sometimes carries a sack of pugwampis to unleash upon a settlement and enjoys the ensuing carnage.[1]

Gravedragger is bored by deserved deaths and rarely kills the wounded, which he considers to be the job of psychopomps. Instead, he prefers to kill through unexpected methods, and retreats if he cannot do so quickly. He usually finds setting up an ambush or spooking a target toward a natural hazard more entertaining than confronting them directly.[1]