The Order of the Chain is one of the seven major orders of the Hellknights. Its members are well regarded throughout Cheliax as the country's premier manhunters.[1] The Order of the Chain counts among its ranks the greatest Hellknight bounty hunters and jailers. Believing that everyone has a vital role to play in society, the order seeks to remove those who irredeemably deny their place and who actively impede civilization's progress. Rather than slaying criminals and nonconformists outright, the Order of the Chain forces most of its captives into lengthy terms of service in work camps. The most dangerous malefactors are sequestered in the order's fortress-prison, Citadel Gheradesca. Few criminals surrender easily, and so members of the Order of the Chain train in a variety of fields: tracking, criminal psychology, investigation, and interrogation, to name a few. Little strikes greater dread in a lawbreaker than knowing she has become a Hellknight of the Chain's quarry.[2] 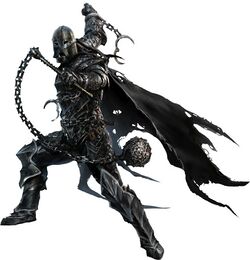 A Hellknight of the Order of the Chain.

The Order of the Chain believes that every person plays a distinct and crucial role in the social fabric of every society. As a chain is only as strong as its weakest link, a society is only as strong as its weakest member. Thus, anyone who would renege from their social duty and seek to escape or take advantage of the social bond, must be hunted down and chastised severely. Prisoners, slaves, and servants are bound to their masters by this steely credo, but the chain binds both ways: masters, slave owners, ship captains, and merchants who exploit or waste their people risk the wrath of order as well.[1] Unlike the other Hellknight orders, the Order of the Chain rarely executes those it captures, preferring to return slaves to their former masters, selling others into slavery, or else imprisoning them in the order's prison-headquarters, Citadel Gheradesca.[3]

The Order of the Chain's support for slavery has led to its members being unable to operate openly throughout the River Kingdoms, whose legal traditions hold that "slavery is an abomination".[4]

Lictor Uro Adom leads the Order of the Chain from Citadel Gheradesca near the Chelish city of Corentyn, and has spent the last decade negotiating the transfer of the Inner Sea region's most notorious prisoners to his (reputably) inescapable fortress.[1]

It is commonly held that members of this Order are the scions of disgraced or fallen merchant houses and slave-holding families. The Order's Master of Blades, Mardinus, is himself a former slave of Lictor Adom, exemplifying how far one can rise by obeying the social order.[1][3] Generally, however, members are guards, sleuths, trackers, or victims of outlaws.[5]