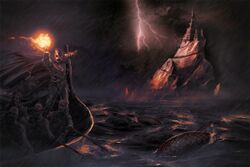 Citadel Gheradesca, headquarters of the Order of the Chain. 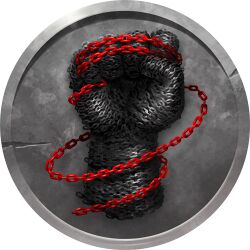 Symbol of the Order of the Chain.

Citadel Gheradesca is the headquarters for the rightly-feared Hellknight Order of the Chain. Located near the Chelish city of Corentyn on a small spit of land only connected to the mainland at low tide, the citadel is thought to be the most secure prison in all of Avistan.[1] It can only be accessed during low tide, as there are jagged rocks and supposedly sea monsters that feed on the prison's dead. Once someone gets to the island they must climb wet, sharp, stone stairs that wind up the outside of the island. These stairs overlook cliffs of the same jagged rocks as are under the water. This is the only path up the island, and is riddled with locations perfect for ambushes and hidden guard posts. The Order of the Chain will gladly hold any prisoners sentenced to jail rightfully by a government. The part of the citadel that is a jail is said to go into the earth, and even under the waves of the ocean surrounding the island. The lowest levels have special cells for those prisoners that are more powerful than the normal prisoners. These cells have been developed over many decades, and may house powerful creatures that must be caged as well as prisoners.[1]