This page contains spoilers for the following products: The Snows of Summer.

Rohkar Cindren is a bandit leader active in southern Taldor, in the region of the Border Wood, where he leads a gang of outlaws named Rohkar's Raiders. 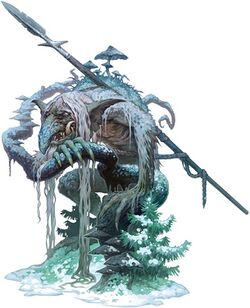 He rose to his current position following the deaths or disappearances of several other high-ranking bandits, most of which he arranged himself. Rokhar developed his faith in Norgorber late in life, and is aware that the knowledge that he worships the god of murders and secrets would shake the confidence that his men have in him. Therefore, he is careful to keep his worship hidden from his men, going as far as to cultivate the images of being a necromancer to explain his magical abilities.[1]

Rohkar and his followers came into conflict with a group of winter-touched fey led by the moss troll Teb Knotten when these creatures entered the Border Wood from a portal leading to Irrisen, on a mission to establish a beachhead for future Irriseni incursions. Rohkar quickly realized that his bandits did not possess the strength or numbers to oppose the new arrivals, and instead offered his services to the fey. These, realizing that Rohkar and his bandits could serve them as both a source of local information and as agents in the surrounding lands, accepted his service.[2] With the aid of the northern fey, Rokhar and his followers were able to overwhelm and kill the High Sentinels, a group of rangers that had opposed them in the past, and take over their lodge as a base of operations.[3]

Currently, Rokhar is uneasy about his new alliance, as he expects betrayal from his northern allies and plans to betray them himself once he has learned as much as he can about them. He has been able to increase his own magical abilities in the process of studying the fey, allowing him to animate skeletons into icy undead servants.[1]