Norgorber (pronounced NOR-gore-ber)[2] is known as a Taldan deity of thievery and assassination, as well as a keeper of secrets. He is called the 'Reaper of Reputation' by some, but has more insidious titles among his other worshipers. He remains an enigma to most, and his true motives are unknown. Many of his own followers remain ignorant of his plans and designs. Norgorber is the only evil deity amongst the Ascended.[3][4]

Norgorber's mortal past before he ascended into godhood through the Test of the Starstone in 1893 AR is unknown to the general public, and his followers go to great lengths to keep it a secret. Some believe that if the origin of the god became known, the god himself would become undone.[5][6]

Few know that he was born in Vyre; while the city is a center of his worship in the Inner Sea region, his cult there maintains a strict level of secrecy.[7]

Norgorber is depicted most frequently as an ordinary human male dressed in brown and black clothing, with his face either partially or completely obscured.[3]

Norgorber lives in Duskfathom, the undercity below Axis. His minions frequently prey upon the city above, and his criminal activities are tolerated as a necessary evil by the other gods, for there would be no need for law without crime.[8] Norgorber's servants in Duskfathom bend Axis' laws to suit their ends, but do not directly disrupt the Eternal City's harmony.[9]

Norgorber attempts to stay neutral in dealings with other gods. Six deities, however, view him with disdain and refuse to speak to him: Abadar views his thievery as an aversion to the laws society is based on and as undermining commerce and the acquisition of honest wealth; Cayden Cailean considers him a coward and a villain; Erastil distrusts him due to the many lives he and his followers have ruined; Iomedae believes him to have evaded justice for too long and to be somehow involved in the death of Aroden; Sarenrae has been burned too many times by Norgorber feigning remorse and redemption to further an evil plot; and Torag sees the activities Norgorber promotes as a cancer that can destroy even the most well-protected city from within.[10] A deceptive deity, Norgorber has been known to aid those who do not support his ideals as long as the end result is to his benefit.[3] Before his demise, Aroden disliked Norgorber in all his aspects, despite being indirectly responsible for his ascension.[11] Father Skinsaw is allied with Achaekek, while Norgorber is generally welcoming of Gyronna and Sivanah.[10] Unsurprisingly, other deities do not fully trust him due to his penchant for betrayal and sabotage.[12] There is a slight rivalry between the followers and Norgorber and Irori, as the Master of Masters feels that Norgorber's use of a magical artifact to achieve godhood is cheating.[13] Norgorber holds a fascination for the archdevil Mephistopheles due to the latter's portfolio interest in secrets; Norgorber wonders what information is really held in the archdevil's mind.[14]

The halfling god Thamir Gixx was first mentioned in historical records soon after Norgorber's ascension, leading some to believe that Thamir's ascension was fuelled by the new god. Some halflings theorise that Thamir is actually an older deity who aided Norgorber in the Test of the Starstone. Thamir's followers are often polite to Norgorberites, who in turn find them too murderous, even when unnecessary.[15][16]

Norgorber's divine servitor race are the karumzek, spiker-like creatures that excel in all the aspects the god is known for: the creation of poisons and other alchemical items, keeping secrets, and excelling at murder.[17]

Secret Shade
This divine minion of Norgorber is a fiendish shadow, an incorporeal undead creature that drains the essence of living beings.[3]

Stabbing Beast
Norgorber's herald is a gigantic, black, scorpion-like entity that also takes the form of a darkly armored humanoid with a scorpion's tail.[3][18]

Venomfist
Venomfist is a large greenish water elemental, infused with poison, with the type varying according to its whims at the moment of summoning. The summoner may be able to convince it to use a particular toxin by offering it a sample of a deadly concoction, whether animal venom, potion, poison, mineral sample, or some alchemical creation. It particularly loves to drown creatures within its own body, especially if the victim is naturally poisonous, or has been paralyzed for this purpose.[3][19]

Yellowtooth
Yellowtooth is a wererat rogue that has the power to transform into an entire swarm of rats.[3] 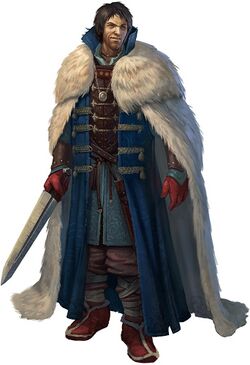 Worshipers of Norgorber are considered cultists by nearly all inhabitants of the Inner Sea region. The cult is forbidden in almost every nation except Absalom, where it is tolerated.[3] His followers tend to be clerics, rogues, bards, and assassins, and wear masks to identify themselves and as a symbol of their devotion to the god. Some worshipers wear different masks in order to signify different emotions or signals, and only remove the innermost masks in private. The masks themselves are often elaborate, with hinged jaws and coloured lenses. There are cults dedicated to Norgorber in Galt, Mediogalti Island, Nex, Osirion, the River Kingdoms, the Shackles, the Sodden Lands, Taldor, and Varisia,[5][4][20][21] and among Keleshites,[22] Taldans,[23] Varisians,[24] gnomes,[25] halflings,[26] and half-orcs throughout the Inner Sea region.[27]

Norgorber's worshipers come from all walks of life, and are collectively termed Sons and Daughters of the Mask. Most followers of Norgorber choose one of his Four Aspects to particularly worship, and while these four followings may cooperate on plans orchestrated by Norgorber and his agents they otherwise pay only marginal attention to each other and act almost as entirely separate faiths.[28]

Halflings are embarrassed to admit that some of their race worship Norgorber: those who have turned to crime and those that are disenchanted with their normal role in life. There are enough such halflings that small halfling-only cults exist. Halflings of Norgorber often retain a loyalty to their halfling communities, secretly aiding them using their dark talents. Most halfling cultists favour the aspect of Norgorber known as the Gray Master, where the rare halfling inquisitors are found; others with a penchant for poison follow Blackfingers. Halflings following Father Skinsaw are as rare as they are mad. The halfling god Thamir Gixx is also somehow linked with Norgorber.[30]

Norgorber's ceremonial colours are black and brown. The cultist's clothes usually follow modern fashions, in order to blend in with the common populace.[5] His priests are all master imitators and confidence men, able to assume identities and infiltrate organizations and bring them down from within.[4] 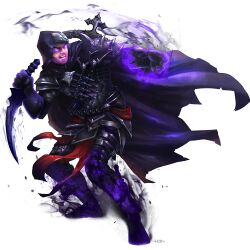 Outwardly, the temples of Norgorber are more akin to a thieves' or merchant's guilds than a religious site. Their true nature is usually hidden, transformed during the night to be obvious to the faithful.[5] The temples are managed by a guildmaster with several underlings in a military or business-like chain of command.[3]

Seventeen short texts, at least, are associated with Norgorber, all of which have code names and are often disguised as unremarkable books.[5] The anthology of Norgorber's faith is entitled The Words Behind the Mask, though no two copies are likely to be the same or interpreted similarly.[10] A minor sect, considered reckless by mainstream Norgorberites, follows an apocryphal text known as the Dark Lure which instructs followers to reveal as many harmless secrets about themselves as possible, so as to dissuade anyone from digging further.[31]

The struggle for dominance between the churches of Nethys, Norgorber, and Sarenrae triggered the Oath Wars in Rahadoum in 2498 AR. This bloody civil war eventually led to the expulsion of all religions from Rahadoum in 2560 AR and the establishment of the Laws of Mortality.[32]

On the 2nd and 3rd of Desnus, his followers celebrate Ascendance Night, the date on which Norgorber completed the Test of the Starstone. There is also a more sinister holiday that takes place sometime in the middle of winter. An innocent person is kidnapped and made a live sacrifice with the use of poison in celebration of Norgorber's Ascension.[3] Cults that refrain from killing instead plant incriminating evidence on their victim, place a drugged target in a compromising position or steal something valuable.[29]

Gods are often associated with certain animals, either because they possess a quality favored by the god, or because the god's faithful feel a special kinship to them. Norgorber's favored animals include spiders, rats, crows and jackdaws, and poisonous animals.[33]

Paizo published a major article about Norgorber in The Price of Infamy.