Birthed to parents of the padaprajna caste of warriors in beautiful Vudra, Sajan Gadadvara[1] (pronounced SAW-jonn)[2] and his twin sister Sajni learned to hold a temple sword before they could walk. Strict padaprajna discipline forged a tight bond between the twins, who spent even their infrequent times of rest together, practicing the latest martial techniques taught to them. On their twelfth birthday, the twins were forcefully separated: Sajan went to live with the fighting men of the ghana padaprajna, while Sajni joined the battling women of the sastra padaprajna. Despite their separation, the twins continued to meet when they could, sparring and joking as they had in their childhoods. 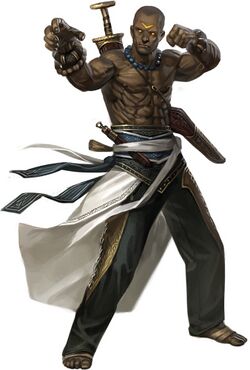 Sajan, having gained great power later in his career

As the insightful narrative of the Vigrahin Patitraka states, "A warrior's life is to war." Thus it was that Sajan's lord embroiled himself in a conflict with a neighbor. Most of the army fielded by Sajan's lord consisted of conscripts wielding tools of their trades, while the valuable padaprajna watched the battle in reserve. The warriors deduced quickly that they stood on the losing side, but they were duty-bound to fight to the death when instructed. Instead, their lord stole from them the glory of battle-death when he sued for peace after his conscripts fled the field. As part of his surrender, the lord gave over half of his sastra padapranja—including young Sajni.

Distraught, Sajan returned to his barracks in tears (for which he received severe beatings from his own father), and vowed that night to be reunited with his sister. Several weeks passed before he found his opportunity for escape. He fled into the countryside and slipped stealthily into the city of Sumadhadra, through whose gates Sajan watched his sister pass. After several days of clumsily seeking information on his sister, he finally discovered that all the traded sastra padapranja were loaded onto ships bound for distant Jalmeray.

Sajan quickly hired himself as a guard aboard a ship bound for the far-away island, and several months later he found himself on its heavily guarded docks. Within a week, Sajan uncovered the fates of most of the sastra padapranja, who worked as guards and courtiers for the island's thakur. Sajni was not among them. More weeks passed before Sajan learned that his sister had, like him, signed on as a guard aboard a trading ship—hers bound for a place called Absalom.

The desperate young padapranja gained passage to Absalom and, upon arrival, stared in wonder at its size and splendor. It seemed to him that the strange western barbarians he found himself among were incapable of a place so grand. By the time he found his bearings and rejoined his search, however, he found himself without leads, for the sheer size that so impressed him also made finding his sister nearly impossible.

Sajan knows he cannot return to Vudra, for the padapranja there would execute him as a deserter. He cares not for his home country, however, and continues to seek out any clue that might point him toward his sister.[3]