Korakai is a tengu oracle from the Isle of Erran.[1][2] 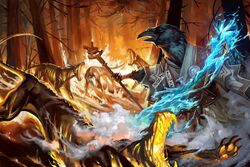 Korakai's earliest memory is of roiling seas. When he was but an egg, his family left the tengu homeland of Kwanlai, first trekking west to the port city of Goka before boarding a ship to the Inner Sea in search for a better life. Like many immigrants from Tian Xia, they headed for Absalom; however, where they eventually settled was not the City at the Center of the World, but the nearby Isle of Erran.[1]

Korakai hatched and grew up on those shores, running barefoot on the beaches and rocks. Each day, his mother would dive beneath the waves, holding her breath to collect shellfish, seaweed, and other ingredients that Korakai carried to his family's tavern. There, his father would cook and brew specialties both Tien and Avistani, many a mix of both. The tavern soon became a bustling place for sailors in port, and as Korakai took orders and carried drinks, he would catch wind of stories from distant lands that he longed to see for himself.[1]

Every so often, sailors would complain of ill winds or other troubles, and wonder whether the superstitions that tengu could ward off bad luck were true. Whenever they would ask, Korakai's father would interject, "Kora, go tell your grandfather someone's here for him." The old tengu with the faded feathers was well known among the sailors for his raucous stories and his rituals to dispel misfortune. Though Korakai suspected that much of the time, his grandfather was putting on a show, he knew that whenever the older tengu asked for his "walking stick"—a khakkhara, a ringed prayer staff that had been in the family for generations—what followed would be nothing less than a glimpse of old Kwanlai. As his grandfather glided in a whirling dance over the deck of a ship, magical feather fan in one hand and staff in the other, even Korakai's clumsy grasp of the Tengu language could catch words of power amid the chiming of the staff's rings.[1]

One day, Korakai demanded to go with his grandfather out on the seas. A ferry needed to cross the channel to Kortos for much-needed medicines, despite signs of a storm, and the captain wanted a tengu on board. At first, it seemed like they would evade the worst, but the sea changes in the blink of an eye. A rogue gust pitched the vessel, almost knocking Korakai overboard, and he reached out with his hand for purchase, finding the end of his grandfather's staff. For a moment, he clutched the staff, his grandfather holding the other end—then, the heirloom snapped. Korakai's hand came away with broken metal, and as the khakkhara's rings scattered into the raging sea, Korakai fell with them. The taste of salt assailed his open beak.[1]

The light from the surface growing distant, Korakai glimpsed a shadow moving through the water toward him: a feathered shape, drinking gourd in one hand. Korakai reached his hand out for help, but the figure was swept away in a twin current of air and water, and Korakai could have sworn he saw a bearded man and a long-haired woman in the spiraling riptide. Again, Korakai tried to swim toward the currents, but again, shadows clashed together—a serpentine creature with a mane of lightning and a pearl-scaled sailfish battled a dragon with salt talons and an invisible force that churned the water into a glaring eye. Blasted back by their conflict, Korakai resigned himself to his fate and sank into the depths.[1]

He fell for minutes, for hours, for an eternity, the surface a distant memory. Against flashes of lightning that had no right shining this far down, Korakai glimpsed gods, spirits, and more primordial things. Yet he saw that each shape, no matter how powerful, always coalesced from the same elements, and always returned to them once their business was done. In that moment, Korakai understood something, and with a peal of thunder, he broke the surface of the water.[1]

On deck, Korakai coughed out seawater. The storm had ended, and though the sails were torn, the crew was miraculously unharmed. The sailors cheered for Korakai's grandfather, thinking he had warded off the tempest, but the two tengu knew that it was no jinx-eating superstition to thank, but something deeper; the storm had not passed at all, it had come to reside within Korakai. As he released his grip on the now-broken staff, sparks danced between his talons.[1]

In the years that followed, Korakai learned how to channel and direct—never command—the powers he had discovered in the tempest. As his grandfather grew older, Korakai helped more and more with the elder tengu's duties, and when he passed peacefully in his sleep one spring evening, sailors came from far and wide to witness Korakai return his ashes to the sea, each ship releasing a paper lantern to float across the waves in his memory. Not long thereafter, Korakai decided to leave the island. His parents were supportive; after all, they had crossed half of Golarion once before, why should they object to their son doing the same? Taking up his grandfather's broken staff, Korakai boarded the next ship out, trading the promise of good luck for passage to distant ports.[1]

Now, Korakai wanders the world with nothing more than the desire to see new sights and collect new experiences, above all hoping to one day visit Kwanlai for himself. Yet even so, he writes home often, sending coin for the tavern when he can, knowing that the beach he grew up on is but an ocean away.[1]