Denizens of Leng are residents of the mysterious and alien Plateau of Leng which lies just beyond the borders of the Material Plane. While they have a generally human shape, on close examination it is clear that they are far from human.[1][2]

At first glance denizens of Leng could almost pass for human—they have two arms and two legs, they are about five and a half feet in height—however on closer inspection they are clearly alien in nature.[1] Their legs end in cloven hooves and their bodies are covered in horn-like protrusions. Most alien of all are their mouths, which are comprised of tentacles and polyps that open in ways that human mouths do not.[1][2]

It is not known whether the denizens of Leng were originally a race from the Material Plane, or if they were always an entirely alien race. Their bodies are made not of flesh and bone but of some substance that imitates these materials. As a result, the denizens of Leng do not bleed. Instead, when they are cut, the blood simply flows straight back into the wound. Any body part that is severed quickly dissolves into a pool of filth.[1] 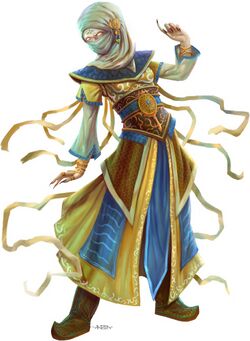 Weiralai, a denizen of Leng slaver.

Though denizens of Leng can primarily be found on their home plane, the Plateau of Leng, they are also found frequently on the Material Plane. They possess incredible intelligence and a strange insight into matters normally mysterious to mortals. Because of this combination, denizens of Leng can be found advising both leaders and madmen, though interestingly, they have also been known to aid the weak and seemingly insignificant. Few try to fathom the complex plots of the denizens of Leng,[1] which tend to spread discord under the guises of ambassadors or merchants.[2]

Denizens of Leng often carry Leng rubies, alluring stones mined in quarries on their home plane, and offer them to the unsuspecting. These gems create a mile-long link that allows the denizen to read the mind of the carrier, or assault them with painful curses.[2]

The bite of a denizen of Leng warps the victim's flesh into debilitating new shapes.[1]

A denizen of Leng can speak any language it hears spoken for at least a minute.[1]

Denizens of Leng are always connected to the Plateau of Leng, from which they can draw planar energy to heal themselves. Also, if a denizen is mortally wounded on any plane other than Leng, they are merely banished to Leng for a year.[1]

While they rarely travel beyond their home plane, denizens of Leng do explore the Material Plane in disguise on monstrously powered, black-sailed galleons with fiendish human crews. They pose as gem traders as they attempt to capture new slaves.[1]

The denizens of Leng have a thriving trade supplying luxuries to the intellect devourers of High Ilvarandin in the Darklands realm of Orv. As a result, their black-sailed ships are a common sight on the Irikusk River[3] and plying the waves of the Sightless Sea.[4]

Denizens of Leng are not restricted to Golarion on their visits to the Material Plane. They have also been spotted on other planets of the solar system, particularly the distant world of Aucturn.[5]