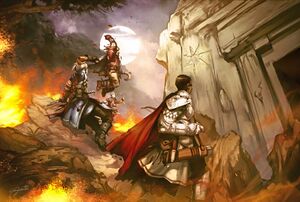 Emberstorms (also known as black blizzards) are powerful duststorms made of ash and embers left behind by large brushfires, such as those used in burn runs. Because wildfires are more common in the summer months, this is when emberstorms are most commonly seen. The Shoanti believe that the emberstorms are the Cinderlands' way of taking the inhabitants of the plains that the gods have chosen to bring to the Boneyard. This causes any winter emberstorm to be considered an extremely bad omen. An average emberstorm will take hours to pass overhead. The winds on the outside edge of the storm can buffet those caught it with strong 30 MPH winds. Smarter Shoanti tribes find areas that will naturally funnel the storm's path, using the geography of the Cinderlands to their advantage.[1][2]