Grisantian lions are the offspring of the mythic grogrisant and the lions of the Whistling Plains.[1]

A grisantian lion resembles a lion and stands 14 feet tall at the shoulder and weighs around 8,000 pounds with a shimmering, lustrous, and remarkably tough hide. Females are usually bigger than males. In cold climates, their fur quickly grows thick, while in hot environments, grisantian lions lose weight and grow fine fur, and males also lose their manes.[1] 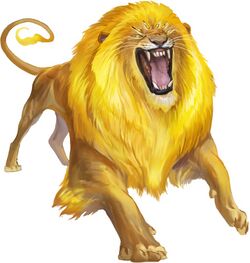 Being the offspring of a legendary beast, grisantian lions are rare but hardy and can live for two centuries or more if prey is abundant. Grisantian lions are solitary, unwilling to share food with others of their kind; they see normal lions as weak and dumb, and only choose the largest, most powerful ones as mates. Grisantian lion cubs are taught the basics of how to hunt and care for themselves, before being driven away by the parent as soon as they can survive by themselves. These cubs sometimes join lion prides, but will quickly end up shunned due to their ferocity, toughness, and cunning. Grisantian lions take a year to mature.[1]

Since grisantian lions are too big to hide in tall grasses, they rely on brute strength and intelligence to find food, targeting adults accompanied by juveniles and forcing the adult to either fight or leave its offspring to its fate. Although they seek easy meals, grisantian lions are haughty and sometimes attack big, tough prey like dragons to revel in battle and demonstrate their prowess; they rarely ally with such creatures. Humanoids are seen as too small to pose a threat, and are only attacked if the grisantian lion is convinced otherwise.[1]

Grisantian lions have spread across and beyond Taldor, the homeland of their progenitor. They prefer warm environments, but can adapt themselves almost everywhere, and their dense flesh allows them to survive cold weather for short periods of time.[1]

For some reason, a grisantian lion's hide quickly degrades in toughness after it dies. Rumours of treatments to preserve its resilience are pervasive and rarely true.[1]

Grisantian lions cannot speak but are intelligent enough to understand languages. Grisantian lion cubs are sometimes captured by Taldan nobles who wish to tame them, but this is seldom successful: grisantian lions are too ferocious and smart to confine or domesticate, and sometimes kill their would-be master when escaping.[1]

It is possible (though difficult) to bargain with a grisantian lion by offering it food and promising it a share of future spoils. Orcs feel a particular kinship with grisantian lions and sometimes temporarily ally with them to raid settlements.[1]