The grogrisant is a great lion-like beast which has appeared a few times throughout the history of Taldor to test great Taldan heroes.[1] 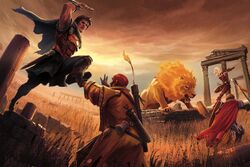 Quinn, Alain and Merisiel fighting First Emperor Taldaris and the grogrisant in a mindscape.

The grogrisant resembles a six-eyed lion which stands 18 feet tall at the shoulder and weighs 12,000 pounds. Its golden mane amplifies sunlight to such great brilliance that it can permanently blind nearby creatures who attempt to look directly at it.[1]

Its magical nature hides what should be massive tracks and masks it from divination attempts, which makes its nature and origins unclear—it might be a solitary, unique immortal or a race of creatures in hiding, but no known evidence proves any theory.[1]

The grogrisant has sired offspring, known as grisantian lions, among the lions of the Whistling Plains.[2]

The grogrisant was first seen in the centuries prior to the foundation of Taldor. It wreaked havoc on the city-states in the region, eating livestock and plundering wealth until First Emperor Taldaris killed it. Since then, the grogrisant has reappeared in perilous times to test Taldor's heroes, and always claims the lives of many pretenders before a true hero ultimately defeats it.[1]