The term pesh in Golarion is commonly used to refer to the narcotic originating from Katapesh. While some of the poorest farmers might own only two or three plants, most settlements in Katapesh devote a field to growing the cacti used in manufacturing the product.[1]

The pesh plant itself is a fuzzy looking cacti that thrives well in the hot and humid environments in southern Katapesh. During spring, pesh plants are known to bloom a distinctive yellow flower with red stripes.[2] As a result of its cultivation, the pesh plant has a tendency to deprive other nearby plants of water and nutrients. [3]

The simplest method of pesh production, is to remove the cacti's leaves and drain the liquid contained within. The resulting thin and pungent milk is then set aside in a cool, dry environment to curdle. After three days, nagri—a bitter salt mined from dry lake beds such as Sabkha—is added and mixed into the curdled milk and set aside for another day. The resulting large, white lumps formed within the mixture are then strained from the whey. Despite its raw solid form, this "raw pesh" can now be smoked in a water pipe such as a hookah, or consumed orally as a single, strong dose.[1]

Refined pesh takes longer to produce as farmers wait for the two months each year when the cacti's flowers are in bloom. During this time, the plant's seed pods swell and farmers score each pod with sharp blades. This allows the plant's pungent, milky sap to ooze out and harden into resin. This process is repeated for weeks, ensuring each plant's seed pods are dry and yield no more resin. The hardened resin is then added to raw pesh and pressed into sticky, black blocks which are then eaten, rolled into leaves and smoked, or mixed into drinks. Despite its characteristic sour taste, refined pesh boasts a potency that rivals raw pesh and is considered a commodity among wealthy merchants and Katapesh's nobility.[1][4]

In its purified form, Pesh is an alchemical reagent and can be used to make various drugs. As an alchemical power component, it is associated with boosting the effectiveness of enchantment spells.[5] 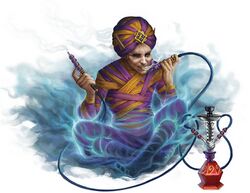 A sahir-afiyun uses pesh to fuels his magic .

Pesh users often experience hallucinations as well as feelings of euphoria, paranoia, and aggression while on the drug. An hour after initial consumption, the users will often feel fatigued. The pesh plant's flower is also commonly used as a spice in cuisine.[2]

A rare type of spellcaster called sahir-afiyun, or "sorcerer of sleep" in Katapeshi, consume pesh to enhance their magical abilities and cast unique spells. This method is most popular among arcane spellcasters and divine spellcasters who worship Norgorber.[6]

A more refined version of pesh is a gnomish concoction known as pho pesh. It is harvested and refined only in the underground settlement of Yavipho where buyers can expect to spend up to ten times more than the standard price. Pho pesh is renown for its ability to far more pleasant and vivid hallucinations compared to standard pesh.[7]

While it is illegal in many countries in Golarion,[6] pesh continues to be Katapesh's main export and can be found for sale in places as far away as Absalom, Cheliax, or Varisia.[1] In Katapesh, its price and quality are closely regulated by the city's Pactmasters.[6]