The Six Trials of Larazod is the fictional account of a Chelish tiefling named Larazod Rilsane. This opera in seven acts was written by Lokoris Sarini in the early 46th century AR and was banned for over a century until the rise of House Thrune legitimized the worship of Asmodeus.

Despite the spectacle and fame of this piece, perhaps the most interesting aspect of the play is that it is rarely performed to completion. The reality of these trials in their most lethal form—as the play's stage directions detail—prove so intense that nearly every performance ends in the gruesome onstage death of the actors playing Larazod and his companions, those who vow to join him in his darkest hour and face the trials alongside him. As such, performances of The Six Trials of Larazod are rare, but typically provide macabre entertainment for the most decadent of audiences.[1] 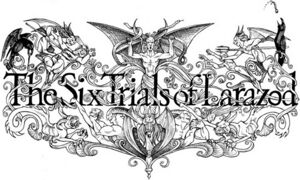 An illustrated version of the opera's title

Larazod receives a vision from Asmodeus in which the dark god unveils a prominent Chelish magistrate—the sinister Paraduke Montigny Haanderthan—as a traitor to Cheliax, who has compacted with demonic powers and plans to bring the worship of Asmodeus to a sharp and brutal end. Burning with unholy justice and diabolical purpose, Larazod, along with his stalwart companions, sets out to expose the highly placed traitor Haanderthan. They are greatly overmatched, as Larazod is a minor scion of a piddling noble house whose influence lies tattered in the wake of Thrune's seizure of power in Cheliax. Undaunted, Larazod vows a smoldering blood oath to Asmodeus to see the traitor fall before Haanderthan's actions bring the dark glory of Cheliax low.[2]

Larazod's actions swiftly bring him to the attention of the Paraduke, who has the young tiefling scooped up in the crushing grasp of the law and brought before his dark tribunal for questioning. There, a dire confrontation ensues wherein Larazod reveals his vision and heaps accusations upon Haanderthan in full view of a well-attended tribunal session. Outrage and scandal threaten to topple the order of things, and Larazod's enemies grow in number. Only one high-placed member of the tribunal takes his part—a beautiful daughter of House Sarini and rival of Haanderthan named Ilsandra. A sultry love affair between Ilsandra and Larazod develops as the pair seeks to topple the treacherous Haanderthan.[1]

Haanderthan, using the awesome influence granted a man of his stature, forces Larazod to undergo six trials to prove the truth of his accusations, stating, "If Asmodeus truly granted you this vision, then his almighty black hand shall shield you from dismemberment and disembowelment in the trials we've planned. Surely your faith does not waver?" Larazod agrees to the trials, blasting the magistrate with unholy oaths to see his foolish plans undone.[1]

The trials follow. Combat with foul beasts and grievous tortures leaves Larazod and his companions brutally maimed both in body and soul. At it's climax, though, Larazod emerges unharmed and is vindicated as Asmodeus himself drags the nefarious magistrate to Hell.[1]

Historical notes on the piece

The writer of The Six Trials of Larazod was a legendary playwright of House Sarini named Lokoris. Writing over 200 years ago, Lokoris was a minor scion of his house who rose to prominence through his gifts of the quill, and who maintained a complete aloofness from political rhetoric or commentary in his many other successful black comedies and heart-breaking tragedies. A signature of his style was the combination of the comic and the serious, a hitherto unexplored mixture of human experience in Chelish drama. Lokoris was a devout follower of Asmodeus in his personal life, and yet his plays were known for their ability to present characters from all walks of life and even different faiths more vividly and realistically than his contemporaries.[1]

The Six Trials of Larazod was considered an outrageous piece in its time and its one performance in Lokoris's days caused widespread riots throughout the city of Westcrown. Some sources suggest the first performance of the play was in Vyre.[3] Lokoris was soon revealed as the playwright, not only ending his career but resulting in his disappearance. He was never found or heard from again, but common theory holds he was swept up by the authorities of Thrune and his soul consigned to some bleak corner of Hell for all eternity—an ironic twist of life imitating art.[1]

The play was banned for over 100 years then revived by a later troupe, whose playing of the piece in the outer regional theatres of Cheliax met with great success (though they went through actors quickly as the trials devoured a few each night). However, as the play began to pick up traction among larger and more respectable troupes, the play proved untenable once more. A production by a highly regarded troupe in Egorian resulted in the audience storming the stage and tearing apart the actors playing both Larazod and Haanderthan.[1]

Since, the play is oft discussed in drama academies and among the well-read elite of Cheliax but has never received a serious staging[1] until perhaps its most famous staging in 4709 AR in the city of Westcrown.

There have been several restagings of The Six Trials of Larazod in the last 100 years, but these have been from a much corrupted, adapted, and markedly less lethal text. Finding a "true" or "original" version now is not easy, but texts arise from time to time. As such, audiences attending the play often don't know from which text the actors will be performing, with those expecting a night of theater instead finding themselves attending a bloodbath and visa versa.[1]

In the corrupted version, Tybain merely serves as comic relief (even most "true" versions cut many of his blasphemous musings on Aroden's power and what not). Additionally, the entire endgame of the plot is often reworked, and the character of Ilsandra much changed. In this censored version, Ilsandra is a succubus who delivers a false vision onto Larazod to urge the youth to topple Montigny Haanderthan—in this version vindicated as a true patriot, falsely accused through abyssal treachery. Therein, Ilsandra is the real culprit, Larazod the flawed tragic hero, and Haanderthan a true believer in Asmodeus under false accusation. Obviously, this reading of the play is far more palatable to most nobles' sensibilities and on occasion receives patronage and stagings. The original version, while deadlier and far more of a spectacle, sees a tiefling triumphing over one of the rulers of the land and seems to encourage defiance against the aristocracy—features that, regardless of the villain's corruption, do not sit well with the noblesse.[1]

Being those to face damnation and torments most foul amid the Six-Fold Trial.

An illustration depicts a contract wielding Prince of Darkness

Larazod Rilsane
A tiefling at a time when being a tiefling isn't easy. To most Chelaxians, tieflings are considered a distasteful mixing of pure bloodlines and diabolic influences based not on thoughtful and potent compacts and bargains, but rather a crude relationship and mere carnal episode bearing rotten fruit. Larazod is a low-ranking scion of a lesser house and has no real influence. He achieved nominal acclaim as an officer in the Everwar but has never really been recognized as a hero. He is an odd choice for Asmodeus's messenger, but his faith in the Dark Lord is peerless and unquestioning. He is a simple and low-ranking member of society who is chosen nonetheless by Asmodeus to right a terrible wrong through faith alone.[1][4]

Dentris Malagrada
An old, cantankerous wizard and a retainer in Larazod's family for as long as anyone can remember. He has forgotten more about magic than most wizards ever knew. While his magic is rusty, his mind is otherwise sharp, and his rapier wit cuts down most foes before violence is even an option in their mind. As snarly and grumpy as he is, he loves Larazod like a son, and though he tries to talk the zealous youth out of his dire course of action several times, he still marches steadfastly into death and dismemberment with his tiefling master once his sound advice is ignored. He is the character who most often moves audiences to tears, and his death during the trials often leaves no dry eye in the house.[1]

Tybain Obeisan
A paladin of Aroden who is drawn to close kinship with Larazod not by common religion, but rather by the mutual power of their faith in their own respective gods. The religious discourse between these two characters in the original manuscript illuminates just how close faiths can be, even when diametrically opposed. Tybain serves mostly as comic relief in this play, though theorists claim his original purpose was far more dramatically interesting, and meant to serve as insightful religious and political commentary. However, most of this was cut in staged adaptations for obvious reasons, and only the comic bits involving this character remain. The actor cast as Tybain traditionally dies first in the Trials and usually to audience applause.[1]

Ilsandra
The diabolic daughter of House Sarini who falls in torrid lust/love with Larazod. Whether or not Ilsandra really loves the young soldier turned tyrant-toppler is a topic of much heated debate among noteworthy drama critics. Many insist she is just using the boy to take down her rival. Either way, no one can deny her canny, Machiavellian mind and demure use of both her charms and wiles to come out on top in the play's conclusion (whether Larazod survives or not).[1]

Drovalid Vorclune
Para Inquisitor of the Tribunal, a deeply pious giant of a man whose flesh is one long taut veneer of scar tissue. He is a self-flagellant whose zealous love of his duties as head torturer is matched only by his zealous belief in Asmodeus's will. Assigned to administer soul-rending tortures to Larazod, the giant is converted by the tiefling's unyielding devotion to his beliefs and decides to assist the unlikely prophet through the remainder of his trials.[1]

Montigny Haanderthan
The sadistic, traitorous, and demon-corrupted paraduke of Cheliax who engineers and oversees Larazod's trials. Arrogant and self-serving, he uses his lofty station in an attempt to deflect Larazod's accusations and put an end to both his accuser and his political rivals. His fate is decided, though, as soon as he defies Asmodeus's chosen servant.[1]

Bailiff
The left hand and herald of magistrate Haanderthan. This nameless servant of the court introduces the feared paraduke and speaks no more, though his ominous presence lingers throughout the trial.[1]

The Prince of Darkness
The archfiend and lord of Hell himself, whose hand shields Larazod throughout his trials and who ultimately exacts his own judgment upon both the accused and the accuser.[1]