Aroden (pronounced AIR-oh-den)[2] was the immortal Azlanti human who raised the Starstone from the bottom of the Inner Sea in 1 AR, founded the city of Absalom, and became the patron deity of humanity.[3] He was once prophesied to lead humanity into an Age of Glory, but on the day of his supposed return, he instead mysteriously died, throwing Golarion into an uncertain future with the Age of Lost Omens.[4]

Aroden was born in the tumultuous final days of Azlant. According to legends, he was an unrivalled blacksmith and Azlant's premier swordmaker, and personally wielded many of his swords to defend Azlant from the chaos of its last decades. He was a follower of Acavna, the Azlanti moon goddess, and Amaznen, god of magic. His most famous creation during this time was the Azlanti Diamond, a clear jewel-bladed sword intended to be the weapon of the next Azlanti emperor. When the then-emperor failed to choose a successor from a pool of unimpressive candidates, he asked Aroden to decide for him, and Aroden took it upon himself to keep the Azlanti Diamond. Many believe this decision provoked the veiled masters to call down Earthfall to destroy Azlant.[5][6]

Aroden led the Azlanti survivors east to the empire's colonies in Avistan and tried to salvage the empire's vast cultural legacy, especially its unparalleled magical developments. Somehow, Aroden became immortal even as his contemporaries bred with other humans and died. Thus, he is considered the "Last of the First Humans" because he was ostensibly the last "pure-blooded" High Azlanti to die (by several thousand years).[5][7]

After a few centuries, a sect of the prophecy-obsessed Knights of the Ioun Star, the former guard of Azlanti emperors, declared Aroden the embodiment of the Last Azlanti prophesied in the Starfall Doctrine. During this time, he led an army into the Abyss to kill Ibdurengian, a demon lord who had been ravaging Azlanti colonies for three centuries in a quest to eradicate all of Azlant's descendants. Thereafter, Aroden remained in the Great Beyond, building up alliances with otherworldly creatures and exploring alien philosophies that expanded his mortal consciousness and perspective. Aroden eventually returned with a new focus: charting a new destiny for humankind as a whole.[5]

In -1524 AR, Aroden's travels in Golarion led him to the Arcadian nation of Xopatl, whose fantastic magic interested him. He spent several years in Jolizpan working as a farmer and fisherman while learning from local botanists and earning their trust. During this time, he befriended the native adventurer Arazni, and together they earned limited access to the sacred Tumbaja Mountain and the Veins of Creation.[8]

After completing the research she needed, Arazni invited Aroden to travel across Xopatl to apply her research from Gujaraldi to distant communities. For the next several years, they earned a reputation as heroes. In -1505 AR, they returned to Jolizpan to report on their improvements, in the process repelling an invasion by the Razatlani warlord Imictal. Following this exploit, Arazni and Aroden were granted unlimited access to Tumbaja Mountain and the kumaru tree that was the source of the Veins of Creation. After Arazni finished her research and parted ways with him, Aroden stayed for his own experiments. Unknown to anyone else, he placed a fragment of his soul within the kumaru tree, giving him the ability to manipulate the Veins of Creation with ease and greatly expanding his power. In -1489 AR, two years after Arazni's death, Aroden left Xopatl.[9]

Before his ascension, he is known to have completed a number of miraculous tasks. The most famous of these is when he traveled to the settlement of Egorian in Cheliax. The town was surrounded by plains of red roses, half of which turned white at Aroden's mere presence. These flowers maintained their coloration for thousands of years thereafter.[10]

Aroden is best known for raising the Starstone to its current resting place on the Isle of Kortos, at the heart of the city of Absalom. He thereafter ascended into the heavens, becoming the patron deity of the Kingdom of Taldor.[3] In order to bring life to the slime-covered Isle of Kortos, Aroden stole five life-giving orbs from the Orvian vault of Vask, which he called aeon orbs, believing that they could be put to a better use aiding humans than supporting Vask's native xulgaths. He placed each aeon orb on a mudbrick Aeon Tower and linked their magic to his own essence, quickly turning the islands green, particularly around the towers.[11] Unknown to Aroden, the sole aeon orb he left in Vask was insufficient to maintain its ecosystem; soon enough, the vault was transformed into a lifeless waste of black sands by the radioactive crystals on its ceiling.[12]

After his ascension, Aroden worked hard to protect and aid humanity, while encouraging the rise of his faith, especially in Taldor. He guided the brightest and finest of humanity to Absalom, and encouraged the growth of the city. He preferred to provide aid from a distance (such as the siege of Absalom in 166 AR, when the Archmage Nex besieged the city). When necessary, Aroden took a very active role in the destruction of humanity's foes.[13] He also defeated the wizard-king Tar-Baphon in combat in 896 AR.[14][4]

Over a few thousand years, Taldor (located due east of the Isle of Kortos) spread its borders northwest across the southern reaches of the continent of Avistan, claiming territory in what is now known as Cheliax, and Aroden's religion spread with it. As Taldor eventually became decadent and effete, the clerics of Aroden took their religion (and their mandate from heaven) west to Cheliax.[15][16]

As early as the fourth century AR, historical records depict a god increasingly removed from the mundane affairs of Golarion, and in the next few centuries he shifted his focus to his growing domain on Axis. When travelling to Nirvana in 1121 AR, he met his old friend Arazni again, now an astral deva, and she accepted to serve as his herald. When Tar-Baphon returned to the world as a lich, Aroden did not intervene, leaving the matter to Arazni (with disastrous results). Aroden is only known to have appeared once in recent centuries, in 4433 AR in the Kellid nation of Sarkoris, to fight the avatar of the demon lord Deskari and drive him and his followers into the Lake of Mists and Veils.[4][17][18][9]

Aroden was a god of human culture, innovation, and history. An important prophecy known as the Starfall Doctrine suggested that he was to manifest in Cheliax in 4606 AR, marking the beginning of a long-awaited Age of Glory. Instead, at the appointed hour, Golarion was racked with three weeks of storms that left the Eye of Abendego as a lasting reminder. When the weather broke, the clerics of Aroden found themselves disconnected from their god. When Abrogail Thrune I took control of the empire, Aroden was dead, and prophecy, which had defined Aroden's life and spurred his personal accomplishments and ambitions, stopped functioning.[4][19][20]

Aroden died in 4606 AR, and his clerics no longer receive his spells. Countless theories exist about how he might have died, including a battle with Rovagug or Asmodeus, a journey beyond the Outer Sphere, or reincarnation into a mortal man to save humanity. The gods might know his true fate, particularly Pharasma, but if they do, they are not revealing it to mortals.[21][20][4]

Aroden's domain on Axis was a massive city, designed as an idealised utopia he encouraged his followers to replicate. Following his death, it was not absorbed by Axis and became known as the Empty Court, an empty wasteland contested by numerous parties, including his former follower Milani, who has rebuilt part of the Empty Court into the Refuge of the Red Rose, her second divine realm. The axiomites have declared the Empty Court a region distinct from Axis until someone wholly claims it.[4][22]

The twelve guises of Aroden

When Aroden walked the world disguised, he took on one of twelve guises: artist, beggar, craftsman or artisan, farmer, fisher, hunter, merchant, scholar, shepherd, soldier, tailor, and thief. Travelers to Westcrown can find these guises carved into stone along the northern wall of the Canaroden, a long canal in the city's Parego Spera district.[23] The twelve guises are also portrayed in statuary in the hidden vaults of the Korradath—the building from where Imperial Cheliax was once governed—the vaults were formerly used by the Church of Aroden in Westcrown.[24]

Aroden's strongest allies were the deities worshipped in Azlant. He turned to the Manual of City-Building, holy text of Abadar, for inspiration when establishing Taldor and Absalom, and saw the art inspired by Shelyn as necessary for a successful civilisation. After the gods he once worshipped, Acavna and Amaznen, died in Earthfall, Aroden pointed to them as examples that gods can die, but humanity will persevere.[6] Irori saw Aroden as a friend who obtained godhood from mortality much as he did, and was greatly troubled by his death.[25]

Aroden respected Cayden Cailean as proof that human ingenuity, luck, and will were such that even a drunkard could succeed in the deadly Test of the Starstone. Norgorber, a villain who represents the darkest urges that hold humanity back, yet became a god through the very Starstone raised by Aroden, was a sworn enemy of every Arodenite. Iomedae, a former paladin of Aroden, inspired her former master through her devotion, and her optimism countered the dark impulses that accumulated during his millennia-long life.[6]

Aroden saw Lamashtu as the darkness and chaos lurking in the wild beyond the perimeter between man and beast, and Urgathoa as a reminder of the worst excesses that he left behind in Azlant. After his death, his clergy blamed Pharasma for withholding his fate, leading to violence across the entire Inner Sea region.[6]

Aroden's church was once the most powerful in the Inner Sea region and influenced almost all aspects of daily life. Following his death, it has fallen into irrelevance, his clerics drifting to other deities.[4] Most of Aroden's followers have become clerics of Iomedae, his greatest servant, who is one of the few mortals of Golarion to complete the Test of the Starstone and gain divinity herself.[26] Those few who do stay true to the Last Azlanti have been left without divine power, sometimes resorting to mimicking true clerical ability with magic items. They preside over crumbling temples, many of which have been taken over by other religions.[3] 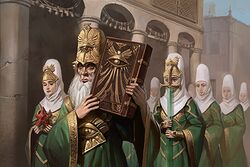 A procession of Aroden's followers.

Priests of Aroden wear elaborate, archaic, multi-layered vestments that were popular in Taldor when the center of the church was still located there. Tall hats or helmets are common as well, and are said to have been inspired by the fashions of ancient Azlant.[3]

Aroden's holy text is called The History and Future of Humanity.[27] The Tomes of Memory are also considered Arodenite holy texts.[28]

Paizo published major articles about Aroden in Humans of Golarion and A Song of Silver.