Succubi (singular: succubus) are a race of demons, typically expressing a feminine form, infamous across the planes for tempting mortal souls and engendering misery and destruction through their seductive manipulations. They are sometimes called lust demons. 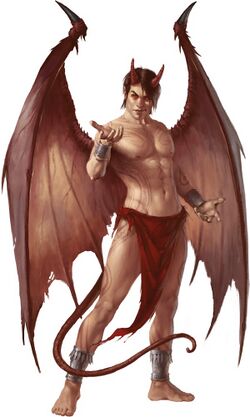 Succubi can take any form their victims prefer.

A succubus, when in her natural form, resembles an incredibly beautiful and alluring human woman, with a lithe figure and dangerously seductive features. Despite their comeliness, succubi possess several clearly demonic attributes, not the least of which are a pair of large, bat-like wings sprouting from their shoulders and sinuous, writhing tails. Of course, it is very rare that a succubus's victim actually sees this form as they are adept at shifting forms to become whatever their victims would find most attractive.[2]

Succubi dwell primarily in the depth of the Abyss, particularly the Midnight Isles, the layer ruled by their mother and patroness, Nocticula.[3] Despite this, they are not uncommon on the Material Plane where they enjoy sowing chaos with their manipulations. Succubi savor the sweet taste of a mortal's life-force and possess the ability to drain it with their infamous soul-sucking kisses. Despite their relative physical weakness when compared with other demonic races such as hezrous or glabrezus, they can achieve very high ranks amongst the fiendish hierarchy thanks to their complex machinations, and many abyssal conflicts have started thanks to their subtle, scheming influences. Succubi tend to be created from the souls of particularly lustful and rapacious mortals, damned to the Abyss.[2]

The demon lord Nocticula is said to be the first succubus. She is worshipped by the succubi.[4]

Succubi are particularly hated by gancanagh azatas who view them as profaning the very notion of romance, love, and companionship.[5]

Succubi rule some of the petty fiefdoms of the Worldwound, maintaining their power through manipulation rather than sheer force.[6]

A succubus named Avalexi operates a hidden shrine to Shax in Magnimar, from which she strikes out against worshippers of Sarenrae in the city.[7]

On other celestial bodies

Paizo published a sourcebook about demons called Demons Revisited which includes a chapter about succubi.