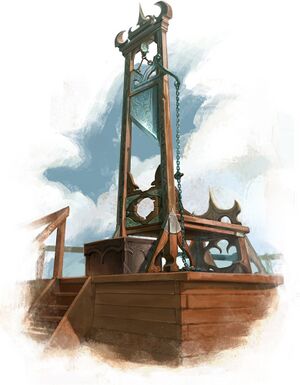 Torvin Academy is a university in the small city of Edme in Galt. The most famous dean of this formerly prestigious Academy was the half-elf philosopher Hosetter, who was later executed by the final blade known as Razor Jenni. Torvin Academy has now been converted to serve as a political prison with Razor Jenni sitting in the middle of the Academy's once elegant quadrangle.[1][2] The Academy has grey walls and its quadrangle is cobbled and full of trampled weeds. Razor Jenni stands on a wooden scaffold, with a stocks below to secure the condemned prisoners before the final blade strikes.[3]