Valeros, Lini, and Droogami deal with a giant mantis. Or this is a common mantis and the heroes are a few centimeters tall.

The term mantis can refer to a family of insect species that share common characteristics. They are also known as praying mantises for how the posture of their front limbs resembles hands raised in prayer.[1]

Mantises are often several inches long. Giant mantises are human-sized relatives of the common mantis, and massive deadly mantises tower over even their giant kin.[2] 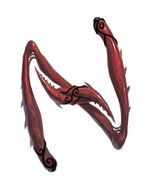