This page contains spoilers for the following products: Wrath of the Righteous and Return of the Runelords Adventure Paths.

Achaekek (pronounced uh-CHAY-kek)[1] is the god of assassins, and the patron god of the Red Mantis assassins based on the island of Mediogalti.[2] Achaekek takes a middle position between Calistria, the goddess of revenge if not necessarily murder, and Norgorber who is the god of all murder, whether paid for or not.[3] His symbol is a pair of mantis claws depicted as if in prayer.[4] 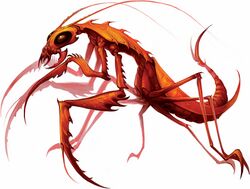 Achaekek's status as a deity is sometimes debated, but many theologians agree that he was the first entity created by the gods to carry out their will. There is general disagreement as to who exactly is responsible for Achaekek's creation, although it was most likely an alliance of several deities[5]—or perhaps, as his own church suggests, Achaekek's creator might have been a deity long ago murdered by Achaekek himself.[6] According to the Windsong Testaments, Achaekek was one of the first eight deities of this incarnation of creation, and originated as a lawful neutral judge over good and evil.[7] When the first deities turned their attention toward the Material Plane, Achaekek stood sentinel at the edge of Pharasma's Spire to oversee the creation of life. Near the end of the Age of Creation, when Rovagug was rampaging across creation, Achaekek consumed his own impartiality and descended into savagery, becoming a mindless beast.[8]

In the Age of Legend, before he became a patron of assassins, Achaekek was worshipped by the ancient Azlanti as a god of monsters and natural disasters. In the wake of Earthfall, some of his deluded priests claimed that he was responsible. At some point after that, Achaekek's faith spread to Mediogalti Island, where his new devotees worshipped him with murder and blood.[9][10]

Whatever his true origins may be, Achaekek was created as an agent for the gods, an enforcer of divine justice, specifically targeting all mortals who hoped to usurp the power of a god and achieve divinity. Not wishing to be become targets of He Who Walks in Blood themselves, however, they made him incapable of killing those who truly were gods, restricting his powers to slay those of demigod status or below.[5][6]

The Mantis God has thwarted those seeking divinity numerous times throughout recorded history. The most famous instances include the slaying of Marsis during the Age of Enthronement, and the slaying of Yazanova in the Tusk Mountains in -212 AR.[5]

The Mantis God has at most an uneasy relationship with Golarion's deities, as most do not approve of his heavy-handed purpose and methods. None dare to oppose him however, at least not openly,[4] and Achaekek keeps no relations of his own with other deities. This extends to his own younger sister, Grandmother Spider, who often tries to convince him to rebel against other gods, although he is known to be extremely displeased with his followers if they kill Grandmother Spider's adherents.[11][12][13] No deity admits to ordering him to assassinate someone,[5] though there are few doubts that many of the gods have requested his services.[11] Achaekek seems to instinctively find his targets, although some believe that the orders come from some yet-unknown source.[5] 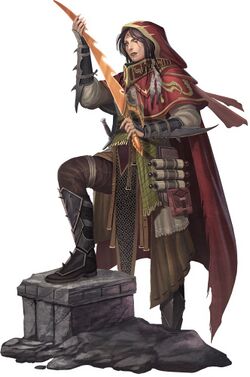 Achaekek does not actively seek followers. He is mentioned rarely in religious texts, but does appear in the ancient Book of Maan and the Path of Ways as a slayer of gods, something his church claims Achaekek is not currently capable of doing.[14][15] Clerics of Achaekek are themselves assassins, even if they lack skill, and those who live on Mediogalti Island are expected to provide some service to improve the city of Ilizmagorti.[16]

He is occasionally worshiped by some ruthless druids and rangers who wish to emulate his efficiency in killing.[3][6] Druids of Achaekek focus on vermin, often have a giant mantis as their animal companion, and are not considered part of the organized church; they forsake all links to friends or family in order to draw themselves as close to Achaekek as possible. As outsiders, they often serve as investigators or even assassins of traitors to the faith.[6]

The largest public temple to the Mantis God is the Pagoda of the Mantis in the Redshore neighborhood of the city of Ilizmagorti,[17] although the center of the faith is the heavily guarded Sarzari Library located within the Crimson Citadel, the headquarters of the infamous Red Mantis assassins located deep in Mediogalti Isle's jungles.[18][16]

In ancient Azlant, Achaekek's priests revered dangerous animals and beasts, and would often sacrifice enemies of the faith by throwing them into crocodile pits or leaving them in the forest for cats and bears to eat. They revelled in earthquakes and tsunamis, and often claimed that Achaekek was responsible in the wake of the calamity. Nearly all other Azlanti considered them dangerous and savage, and both the empire and enemy faiths regularly hunted them down. Most of his temples were located in remote areas, with a few hidden and kept secret in cities.[9]

Relations with other religions

Achaekek's followers have no tolerance for the Skinsaw Cult sect of Norgorber, but allow other worshipers of the god of secrets into Ilizmagorti. They respect Mephistopheles and his domain over contracts. Prior to Nocticula's ascension to the true deity the Redeemer Queen, they gave her followers a degree of respect as skilled peers in assassination, though their respect was limited by disdain for their status as lone agents.[11] In the wake of her ascension, she no longer includes assassins or assassination in her portfolio; it is unclear whether her abandoned followers still have the Mantis cult's respect, or whether some of those abandoned assassins might take up worship of the Mantis God themselves.[citation needed]

They avoid initiating hostilities with other religions over doctrine but are staunchly opposed to Rahadoum, the cult's ancient home, which exiled them after enacting the Laws of Mortality.[11] 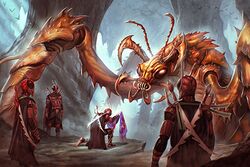 The Red Mantis assassins secretly venerate He Who Walks in Blood. They use the Mantis God's persona and tactics as a model for their behavior and organization.[4] The Red Mantis seek to emulate their patron's role by never targeting a rightful monarch, just as Achaekek is incapable of killing the truly divine. They see the murder of monarchs as blasphemous and abhorrent, and consider them the anointed agents of the gods in the mortal world.[14][6]

Leading the Red Mantis are the Vernai, also known as the "High Killers", from the Crimson Citadel. These 13 women are themselves led by the Blood Mistress, a figure considered to represent the Mantis God's will on Golarion.[6]

Some of Achaekek's worshipers disavow the Red Mantis assassins but still receive divine magic from the Mantis God, though these heretics are considered enemies of the church by the Vernai. While this sometimes leads to comparisons to Skinsaw cultists, both groups despise even the insinuation of such a connection.[15]

An opening to Achaekek's realm of Blood Vale is carved into the base of Pharasma's Spire in the Boneyard. The Vale's caverns, which run adjacent to Hell, Abaddon, and the Abyss, are full of crimson jungles.[12][11] The plane's razor-edged walls include passages to those adjacent planes, and the Mantis God keeps dens on other planes, including Avernus in Hell.[11]†

Zyrruthys is a huge intelligent mantis that enjoys destroying villages of blasphemers and is Achaekek's herald. Often confused with Achaekek, Zyrruthys never asks for payment when summoned to perform this task.[11]

The Mantis Blade is a unique minor artifact sacred to followers of Achaekek.[19]