In 4713 AR, or AD 1918 in the calendar of the planet Earth, Russia[1] is in the grip of a fierce revolutionary period and has recently pulled out of the global struggle on the planet called the Great War. Since AD 1917, due to the Revolution, Russia is now officially called the Russian Soviet Federative Socialist Republic[2] having succeeded the Russian Empire ruled by the Tsar Nicholas II, though Russia is still used as a shorthand. Affectionately, Russia is called Mother Russia or the Motherland.[3][4]

The flag of the Russian Empire

The Russian Empire was founded in AD 1721 and came to end in AD 1917. It was ruled by an autocrat called a Tsar and its capital was Saint Petersburg for most of that time. The last Tsar was Nicholas II.[4] 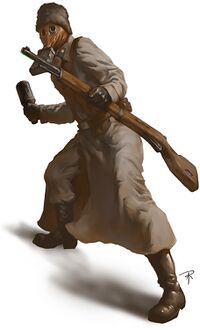 Russia is ruled by the communists under Vladimir Lenin, but the country is not stable and a civil war rages.[4]

Russia is a vast country: the largest on the planet Earth. It is split into regions and some of these are known, for instance:

Geographical areas known in Russia include: