Long ago, dwarves dragged giant forest toads beneath the earth and altered their physiology with powerful magic in hopes of creating powerful underground beasts of burden that would be perfect mounts. Slurks (pronounced SLUHRK)[1] are the disgusting result of their aborted efforts. The creature's unappealing slime and foul reek caused the dwarves to drive away their creation in disgust. Kobolds, on the other hand, are less picky, and frequently use slurks as mounts to this day.[2]

Slurks are oozy abominations resembling pale, slime-slick toads with enormous, saber-like teeth. Their backs drip viscous mucus while their bellies are coated with a thick film of greasy slime. They use their slime as an offensive weapon, coating their opponents with the glue-like phlegm and making it easier to bring their gigantic, walrus-like tusks to bear on their hapless victims. Their sticky back-slime makes them ideal mounts for the kobolds, who can adhere to their backs without the need for a saddle.

Slurks are powerful leapers capable of moving along the walls and floor of rough underground tunnels at incredible speed. They are not the brightest of beasts, however, and more than one kobold has suffered a crushed skull after their slurk smashed their head into the cavern ceiling with a mistimed jump.[3] 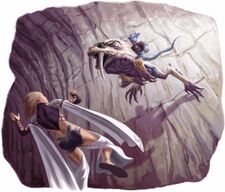 A kobold mounted on a slurk.

Even though they have long since been abandoned by the dwarves, slurks can be found in the company of other less-discerning Darklands races. They are sometimes bred like cattle by those who do not mind their rubbery, yet nutritious meat, or kept as pets or mounts. Slurks eat mainly lichens and fungi.[2][4]

When properly treated, the slime excreted by slurks can be used as a natural adhesive and water sealant. This mixture is used not only to fix objects together, but can also be spread on the hands and feet like tar to allow the user to more easily adhere to surfaces while climbing.[2]