Although mitflits originated in the First World and still retain some fey properties, their ties to their ancestral home have weakened over millennia, to the point that a few scholars have re-classified them as humanoids.[2] 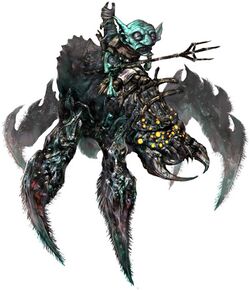 A mitflit riding a giant tick.

Due to the loss of their ancestral gremlin magic, mitflits are pitiful, insecure creatures. They mostly keep to themselves and are easily bullied into submission by those more powerful than they are, even though they make terrible servants and food. They find comfort within a social structure, even when they are abused, and only rebel if their rage hits a breaking point.[3][2]

Mitflits have a strong connection to vermin of all types, the only other beings that seem to tolerate them, and often tame them to protect their underground lairs. Mitflits control these creatures with sounds and gestures, exchange these commands with others of their kind, and feed their own dead to breed vermin.[3][2]

Mitflits most intense hatred is reserved for dwarves and gnomes (particularly the Darklands-dwelling svirfneblin), but because of their natural cowardice, this seldom leads to serious violence.[1]

Mitflits are naturally prone to insanity. If their short, wretched lives do not end before a few years into adulthood, mitflits become amnesiac, paranoid, megalomaniacal, and start seeing hallucinations.[2]

Being physically weak, mitflits prefer to overwhelm their opponents with superior numbers, cutting at their enemies with small knives in a bloodthirsty frenzy.[4]

Most mitflits on Golarion live in the Darklands realm of Nar-Voth, where they inhabit the smallest, darkest tunnels. The dwarves joke that this is because mitflits are so ugly that they cannot stand to look at one another, which is a cruel inaccuracy, since mitflits see quite well in darkness due to their darkvision.[4] The largest known population of mitflits can be found in the upside-down city known as the Court of Ether, where they dwell alongside thousands of their fey brethren, and are ruled by Queen Frilogarma.[5]

In the past, the goblins of the Varisian city of Magnimar's sewer competed for space and resources with a population of mitflits who had made their way up from the Darklands realm of Nar-Voth. The sewer goblins eventually won this contest and drove the blue-skinned creatures to migrate to other areas, such as the pilings of the Irespan.[6]