Stalker automatons are the unparalleled assassins and scouts among automatons. Most are built in a feline frame capable of blending seamlessly into its surroundings.[1] 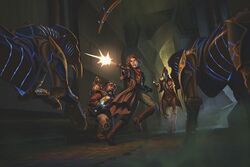 While made of metal, a stalker's automaton core can use illusion and transmutation magics to transform not only its coloration but also its texture. For instance, a stalker can form illusory plant growth to better blend in to a natural environment. Most are five feet long and weigh 300 pounds, but particularly old stalkers remember bear- and drake-sized models.[1]

The Artificer Conclave built upon the predatory strengths of large cats to further perfect their ability to stalk and kill prey. These gifts attracted the Jistka Imperium's greatest hunters to take on its form. While initially deployed against the Imperium's foes, the hunters within grew bored and began stalking prey across the Inner Sea region, then the Material Plane, and eventually into the Great Beyond.[1]

In addition to its adaptive camouflage, stalkers can phase across planar boundaries to traverse Material Plane distances seemingly instantaneously, though this falls short of true planar travel. While formidable, they are especially patient and tactically adept, willing to retreat when overwhelmed and sometimes satisfied with simply going unnoticed in the presence of especially powerful quarry.[1]

Stalkers tend to hunt alone, but occasionally join with others to hunt as a pack of up to six close-knit members. Packs name themselves after their greatest successes, such as Titan Slayers. These groups lack a hierarchy and are guided only by the next hunt, regardless of which member locates it.[1]

The pack known as Those That Sought the Beast is said to have gained a divine spark of its own, and have begun pursuing Spawn of Rovagug as their great hunt.[1]

Few stalkers remain on the Material Plane, particularly around Jistkan ruins, and pursue automaton cores, whose rarity makes them worth the hunt. Some also guard Jistkan ruins from intruders or those still infected by the Night Plague.[1]

Stalkers who settle in Axis tend toward a more peaceful existence, either learning from inevitables and axiomites or serving as guides and hunting teachers.[1]